Art of war - enemy too strong, joke around

Tomorrow, I'll be in Pekan for nomination day.

Just wanted to check out how things are with Najib's fortress.

I was there on nomination day of the 2008 general election.

Najib almost had a disaster in 1999 when his majority was reduced to just 241 votes.

Najib was back then fighting for Dr Mahathir against the forces of Anwar Ibrahim.

Now he is fighting against both Dr Mahathir and Anwar.

Quite weird, come to think of it.

So, I think it's almost impossible for him to lose in Pekan.

This time Pakatan has sent some sort of a joker to fight against Najib.

Okay, Zahid Mat Arif is the grandson of former deputy prime minister Ghafar Baba, but other than that, the only thing exceptional about him is his ability to tell quite hilarious political jokes in his speeches. 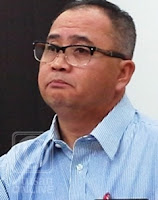 Guess they know they can't win and decided just to make things fun for the people of Pekan.

Actually, it's quite smart of them to do that.

I would have done the same.

Sometimes when an enemy was too strong, I just made fun of the whole fight.

Like pointing out that my enemy was smelly or something, which was true by the way.

I think Pakatan is doing something like that as far as Pekan is concerned.

Who knows, maybe they can reduce Najib's majority by just joking around.

Or maybe Zahid's jokes become so good that all Pekan folks actually turn around  and let him win.

Eh, anything could happen, okay.

Well, I'm going out to get myself some breakfast now.

Going to just lepak around the whole day.

Away from the GE14 nonsense for a while.