Rambling on a boring Saturday

Surfed the net for interesting new stories but can't find any.

Except maybe the storm approaching southern US.

But that's far away from here.

The rest seemed the same as usual.

Anyway, some of my friends were not very comfortable with my last post about masseuses and prostitutes.

One of them even scolded me.

"Why la you tell people you go massage. People may think you are not a good person. It will affect your credibility," he said.

I was like...huh, what's so wrong about going for a massage.

I did it all the time whenever I felt like it.

I don't see anything wrong with it.

Sometimes I even go for massage when I'm travelling overseas.

The best I had was in Shanghai. It was a medicinal massage for lower back.

The first time I went for a massage was with my mother.

She used to take me and my dad for a massage at a place called Si Fu in Bangsar. 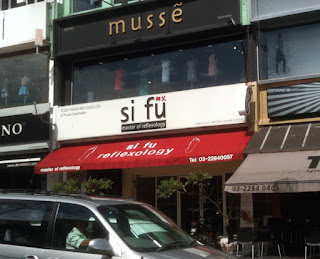 The masseuses were locals, mostly from Sabah.

They were very good.

So, really, it's no big deal actually.

I think people tend to jump to conclusion about certain things.

By the way, I'm writing this blog not to show people how intelligent, credible or even how moral I am.

I'm just writing what I experienced and read as well as giving a bit of my opinion on them.

So, it doesn't matter what people think of me.

If they like to read my blog, they are welcomed to it.

But if they don't like it because they think this and that about me, then they just don't have to read it and waste their time.

Some thought I'm campaigning for certain quarters, but really I'm not.

What is right is right. What is wrong is wrong.

By the way, who do you think may want to pay me for writing this whimsical post anyway.

Not even BN want to waste their money on a stupid blog like mine.

It doesn't even have charts, graphs and all the fancy statistics.

Several prominent BN bloggers even said that my blog is devoid of facts and useless.

Really. That's what they said.

And they were right in that sense.

As I said, I only write what I experienced and read as well as giving a bit of my opinion on them.

Yes, theirs are superior blogs, and mine is a useless blog.

I got no problem saying that.

That's because I can manage my ego quite well.

In fact, I don't want to be like them.

I'm just happy being the way I am.

Really boring day with nothing much happening.

Listen to this song lah ya,