Can we have better highways at no extra costs? (updated)

Govt Concern Over Maju Holdings' Bid To Take Over PLUS - Johari

This one is better, I think, as it quoted Datuk Jo the second finance minister instead of some don't know who analysts and obscure MPs.

The government is concerned over MAJU Holdings Sdn Bhd's proposal to buy PLUS Malaysia Bhd as it is afraid that the nation's strategic assets would fall into foreign entities if it is sold to another company.Commenting on the issue, Second Finance Minister Datuk Seri Johari Abdul Ghani said there were similar proposals but they had been rejected."We do not know the source of the fund, if it is an offshore borrowing we are worried that these national assets would fall into foreign hands if the loan could not be paid," he told reporters on the sidelines of Fiesta Labur PNB 2017 here today.

So, the government is afraid that the nation's strategic assets would fall into foreign entity. Okay, that's reasonable.

But Datuk Jo, can we make our strategic assets not be too burdensome for us?

Try la not to let the toll be too expensive....and if possible put more lighting along the highway like what Abu Sahid said he would do.

Also, please keep the other strategic assets safe from foreign take over too. I mean the railways, ports, airports etc.

There are these stories by Bernama, which made me curious,

14.5 Mln Contributors May Lose Out If EPF Sells Plus

which was published five days ago, and

MP Says Best To Keep PLUS In Govt Hands

which was published yesterday.

The first one quoted some analysts without naming them and the other one quoted Sekijang MP Anuar Manap. Hmmmm....hardly authoritative, if you asked me.

I think Bernama could had done better with their stories if they were meant for PLUS to remain under the control of UEM/Khazanah and EPF instead of being taken over by Maju Holdings as proposed.

Nonetheless, this is also a story by Bernama a week ago as published by Malaysian Reserve, but it goes the other way around,

That one quoting the loud Tourism and Culture Minister DS Mohamed Nazri Aziz.

Mohamed Nazri, who is also an a Umno Supreme Council member, said the federal government had to fork out compensation of about RM900 million to avoid a toll increase, as this would burden highway users following the concession agreement signed by the previous leadership.
“We have to crack our heads every time we (the Cabinet members) discuss on raising the toll rate. If we do not allow the highway concessionaires to increase toll, the federal government will have to pay RM900 million.
“As such, I fully support such proposal because we will not have to pay the RM900 million and almost RM1 billion could be saved for the benefit of the public,” he told reporters after launching the Keretapi Sarong 2017 #SayangMalaysia programme in Kuala Lumpur.

Okay, Nazri seemed quite rationale on this one.

PLUS said they have not increased toll rates for the past 10 years, but if I understand Nazri correctly, that's because the government paid quite a lot of compensation for it not to do so.

Well, government's money is our money, so actually going by such logics, we are paying extra to PLUS even though it has not increased the toll rates.

Then there's this story a few days ago,

It was an interview with Maju Holdings boss Tan Sri Abu Sahid Mohamed.

“We haven’t discussed anything and they’re already saying no. Why are they so reluctant to meet me?” asked Abu Sahid when met by The Mole yesterday evening.
Insisting that his proposal was credible, Abu Sahid said it was drafted by renown international boutique investment bank, Evercore Partners.
He is also baffled by negative public feedback over the proposal, despite him guaranteeing a 20-year-long no toll hike for all highways under PLUS.
“Malaysians cry foul whenever toll rates are increased but when I told them I can guarantee a static toll rate for 20 years some also protest.
“It can be done. Evercore had done the maths and they told me that it is still profitable to operate the highways even if I do not raise the rates for 20 years,” stated Abu Sahid.
One concern echoed by the detractors is that it would deprive the 14.5 million EPF contributors a steady stream of dividend income.
Concurring that the contention may be valid, Abu Sahid however argued that the amount of annual dividend that EPF contributors has been getting from its RM400 million earnings from PLUS is only RM28 per contributor.
Abu Sahid said the proposal offers EPF and Khazanah a RM2 billion payment in cash each and that the amount paid to EPF will enable its contributors to enjoy a one-off RM142 dividend.
I have to admit that Abu Sahid's offer and explaination of the proposed deal seemed quite impressive.

I was also told by someone who knows about the offer that Maju Holdings even offered to instal lights throughout all the highway stretches.

And all this without a toll hike or compensation from the government for the next 20 years.

Imagine driving from the Tuas toll in Johor to Bukit Kayu Hitam toll in Kedah at night with the highway all lit up.

No more dark and lonely drive.

No more pontianak highway hitch hiker stories to worry about. 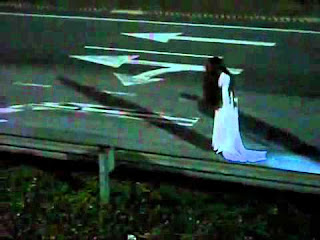 Okay, I know, some of you may think it's all ridiculous and Abu Sahid was only bullshitting about this.

But really, could someone care to explain why this cannot be done.

I mean, could someone from Khazanah, UEM or EPF officially rebut Abu Sahid's offer.

Explain to us why all that can't be done without the public having to pay more when they use the highways.

Personally, I do prefer for the highways to be under government's control like how it is now, but I also would like to know why the rakyat could not get a better deal for the highways as offered by Abu Sahid and his company.

Okay, I met Abu Sahid once and he did seems to be a bit eccentric  and quite loud just like Nazri who supported his offer.

That's probably because he's from Muar.

The rest of us other Johoreans tend to see Muarians to be like that.

Don't know why though.

They are just "different".

But still, the offer he made does sounds quite good.

If it's for the good of rakyat and country, I think we should at least discuss about it.

If it turned out to be just bullshit, then we should be properly told why is that so.

It's only fair, I think.

So, how about it Khazanah, UEM, EPF? Can explain? You all can offer us rakyat a better deal or not?
Posted by Annie at 14:25