Doing our bit for Malaysia


I believe that most of us do love our country.

Despite our complaints and unhappiness, we want to do the right thing for Malaysia.

Maybe our ways of showing our love for our country were different, but still we want the best for it.

As for those who forsake this country, I think they did so more due to personal reasons and not because things are so bad here that they were forced to leave.

There were many who left but later came back.

I have a friend who migrated to Australia but returned after she suffered chronic spinal ailment which costs for treatment over there were too expensive.

Others came back just because they missed the life here.

My mother's sisters live and work in Singapore, but they are still Malaysians.

One of them was married there and her children are Singaporeans.

Still, despite living a completely Singaporean life, my aunt loves Malaysia very much.

She cheers for Malaysia in her Facebook postings whenever our athletes participated in sporting events. She's a big fan of Lee Chong Wei.

Of course, she loves Singapore too.

It's after all the country of her husband and children.

As for us here, sometimes we got angry with what's happening in the country, but most of us still want to do the right thing for it.

Deep inside we know this country of ours is not so bad.

It's not perfect, of course, but it's much better than most others.

The truth is that, despite our complaints, most of us still want to contribute in making this country a better place.

Remember that private neurosurgeon I highlighted in this post,

Yes, the one who said he didn't want to help out at the government hospital anymore because the Inland Revenue Board people are giving him a hard time.

At that time he was angry. He even contemplated taking up an offer to work in beautiful Maldives.

Apparently he's okay now and is back doing his volunteer work.

He tried to sound reluctant but I know he loves doing his bit of national service.

This is my Wassap conversation with him the other day. 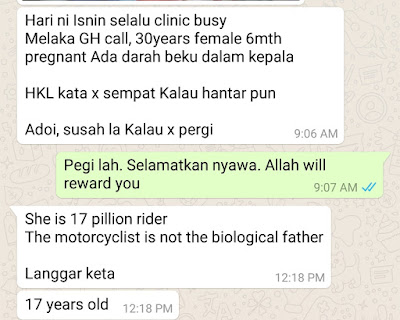 Yup, sometimes we thought that this country is so fucked up, but actually it's not and we still love it and want to do the right thing for it.

I think it's a bit like having a cranky boyfriend or girlfriend whom we love so much.

End of the day, we still love and want the best for him/her.
Posted by Annie at 21:54