I went for a massage yesterday.

Have to because I felt that all my muscles were very tight.

Maybe because of work stress.

It was a Thai oil massage. 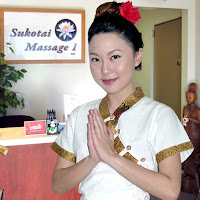 The masseuse was Lita, a 26-year-old lady from Bangkok.

She's very good at her work and was quite strong despite only weighing 46kg.

Lita can speak a bit of English, so I had a conversation with her as she did her work.

She started as a masseuse three years ago but only came here recently.

She used to work in a factory but the pay was not good enough.

Life was tough, she said.

I asked why she came to KL for work.

Her customers were mostly men.

I asked whether they were good to her.

"Men all same. All naughty. I ok. They pay," she replied with a giggle.

"No sex. Special massage only. Pay extra," she said and laughed.

Well, at least she's not saying she's prostituting herself.

Many do so though.

Then there were those from Russia, Uzbekistan and such.

I do wonder what made them take the trouble to come all the way here to earn a living in such an awful profession.

I mean, everyone seemed to say that their countries are nowadays better than Malaysia.

China, for instance, is overtaking US as the world leading economy.

How come then there were those who came here peddling sex.

If not sex, then they massage our feet for a fee.

Rather nice feeling though having someone from a world leading economy massaging my feet.

Vietnam, Thailand, Indonesia and even Philippines were all said to be overtaking us in terms of economy, yet some of their women are here  doing that sorts of jobs.

When I think about it, it does make me wonder why people said our country is so bad going to worse.

You don't go to a worse country than yours to offer sex for money or to earn a living massaging the people who were supposed to be worse off than you.

You go to a better place for that, I think.

Let's say I'm to be a masseuse and have to work overseas to earn a better income, I think I prefer to work in London or Paris.

I don't think I want to do such a job in one of those failed states in the Middle East or Africa.

Well, I think I'll only believe all those talks about our country going to the dogs when all the foreign prostitutes are no longer here.

Or if I have to go to a kampung mak andam for a massage because all the Thai and China spas were closed down because the economy is so very bad.

Let's not even talk about the millions of foreign workers, legal and illegal, who cari makan here, okay.

Well, I know, some of you all think I'm going crazy writing this post about masseuses and prostitutes, but really guys, doesn't it all made sense to you all?

Anyway, since the Thai oil massage I had yesterday was so good, I'm putting here a Thai song for you all.


A bit violent here and there but the rest are quite okay, right?

Typical Thai love story. They slap each other quite a lot, I guess. Kena tampar sampai jatuh jambatan.....hahaha