Woke up quite early and did some work.

After that I thought of writing something quite serious here.

It's about people being rude to their elders like what happened to Tun Dr Mahathir Mohamad and then to former Pribumi Bersatu vice president Datuk Hamidah Osman.

But then just now I suddenly felt very lazy.

Don't know why but I have been feeling like this over the past few days.

One moment I felt that something is important, the next I can't be bothered with it anymore.

Anyway, I think I just want to make a small complaint instead.

Yesterday evening I was with my friend and her kids when we decided to attend the closing ceremony of the Asean Para Games at the National Stadium in Bukit Jalil.

We wanted to lend our support because we had been hearing that attendance for the event had been poor.

So, my friend and her two children joined me on the drive to the stadium all the way from Klang.

Unfortunately, as we approached the stadium we kept being stopped by the policemen at several entrances of the stadium compound.

They directed us to go to another location to park the car.

Not being very familiar with the area, we ended up getting lost and since the kids were getting restless after a while, we gave up trying to find the designated car park.

Well, so much for trying to show support for the para athletes.

But then again I guess the stadium was already full that we were having difficulties even to park the car. 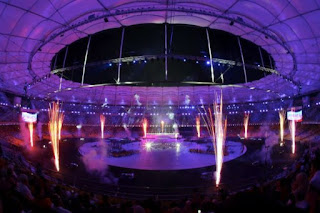 Still, I wish they could had made that easier for us.

It would have been memorable for us if we had made it to the stadium yesterday.

I have been inside the National Stadium just once and that was during the Commonwealth Games in 1998. I was still a kid at that time.

Even more memorable it would had been for my friend as one of her kids is with autism.

The boy would have loved it.

Well, what to do.

Putting a song here to cheer myself up,


That's the favourite song of my friend's son who is with autism.
Posted by Annie at 07:34