A pro-Najib friend asked for my opinion on this news,


Told him that I have no opinion on it.

Honestly, I never truly understand the 1MDB issue due to its complexities.

That's why I don't really write about it.

My friend on the other hand was happy with the news.

He said it settled the issue.

I didn't say anything or asked for him to explain why that was so.

I suspect that he doesn't really understand the issue too and was only saying he's happy because others who support Najib kept saying that.

The same goes with most others from the other side who whacked Najib over the issue.

They just believe and follow what others were saying without really understanding it.

Many claimed that they understand it, but I believe that's because of pride more than anything else.

That has always been the case with most of us when it comes to politics.

Facts doesn't really matter because most of the time people formed their opinion based on sentiments.

No matter how accurate your facts were, if people don't like your face, they will not believe you.

That's why if you want to present your facts, you better make your audience like you first.

If you are arrogant because you said you have all your facts right, they will just give you their middle fingers.

Man with facts : "Hey you all stupid people, see, my facts are all in order. You all better listen to me."

Angry people without facts : "Fuck off you arrogant bastard. Shove your facts up your ass. We don't give a shit. We just hate you all pompous mother fuckers."

This was exactly what happened before the last general election.

The "Asal Bukan Umno" campaign was a sample of how the public was urged to hate without thinking too much.

Once people hate Umno, they don't care what facts were presented before them.

It's simple and effective.

The hate was built on sentiments.

And the sentiments were built on emotive issues such as the death of Teoh Beng Hock back then.

The opposition parties played up the issue to the maximum and it became a major contributing factor which caused the Chinese tsunami of 2013.

And angry people don't really give a shit about facts.

I think the game play will still be the same for the next general election.

It will all depend on how both sides play on the sentiments.

It's not going to be based on facts.

The big question is - are the people angry enough to a point where they don't care what will happen after the election?

The opposition would like to hope so, I guess.

They want the people to be angry enough with BN to a point where they forgot that the opposition were themselves in a bad mess.

BN, on the other hand, really should not irritate the people some more.

Too much of that already.

For instance, I think if Umno have something good to announce, they better find someone else other than Ku Nan to do it. 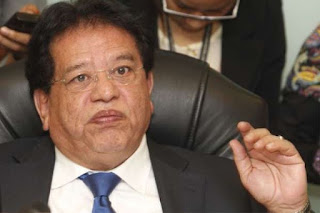 Sorry, but just looking at his face irritates me.

I don't have the facts on why Ku Nan's face irritates me....but it just does.

Find someone more handsome to make such announcements, boleh tak?

Otherwise I would not be bothered to listen, okay.

So, having facts alone is not good enough.

You need to be good looking or at least charming too.