The hottest political story at the moment is the ongoing Pas' annual general meeting in Alor Setar.

Everyone who are writing politics have been writing about it since the past weeks.

Everyone are saying Pas will break up with PKR and get out of the Selangor government.

They are going alone, so it was written.

Well, I don't think that will make much a difference.

It's not going to topple the state government.

I even dare to predict that Azmin Ali and gang will continue to rule Selangor after the next general election.

You all really think Noh Omar can lead Umno and BN to victory in Selangor? Seriously?

Well, if Pas really want to get out of the Selangor government, they could had done so way back then when Pakatan Rakyat ended.

They don't need to wait until this AGM.

I guess they wanted to stay there till now as they need to earn a living.

Since the general election is expected soon, it's only natural they want to get out now.

Those posts only last that much after all.

Can Pas survive on it's own?

The probable scenario is that they will face three-cornered fights with Umno and its splinter Amanah in most places.

I think the winner will be Umno because the opposition votes would be split in such a fight.

Tok Pa may even capture Kelantan for Umno.

And Umno may also likely retain power in the other outright Malay-majority states of Terengganu, Pahang, Kedah and Perlis.

Okay, Kedah may be more tricky because of the Dr Mahathir's factor. Maybe the votes may split equally three ways - Umno, Pas and Amanah+Pribumi Bersatu.

But still, I don't see Pas winning even in Kedah. I think it should be between BN led by Umno or Pakatan Harapan led by Mukhriz.

So, Pas may come out of the next general election without winning anything.

Well, somehow I don't think Pas people would mind that too much.

Their leaders kept saying these days that their struggle is to uplift Islam to greater heights and not actually to rule the country or even winning elections.

By the way, Pas president DS Abdul Hadi Awang at the Pas AGM yesterday cautioned Muslims not to be split. 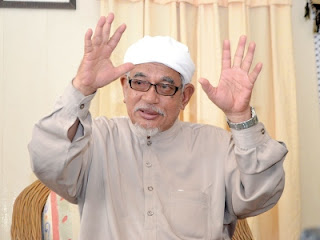 Wish he had said that long ago.

In fact I think Pas should be dissolved and its members be made to join Umno.

Or at least it can be transformed into a dakwah organisation like Abim while its members do their politics in Umno.

That way there will be true unity of the Perpaduan Ummah variety.

That way also there will be no more people claiming they are more muslim than the others and use that argument to win votes in elections, especially in the kampung-kampung.

Anyway, I hope those injured at the Pas complex during the storm yesterday are okay and getting treatment in hospital.

Okay, a bit of entertainment should do for a Sunday,


Of course the song is not for Pas people. It's too feeling feeling. Pas people are good tough Muslims and only listen to nasyid for entertainment :)