Umno not to field racists in Sg Besar and Kuala Kangsar

The latest that I heard was that BN, or to be more precise Umno, will not go into the coming by-elections of Sungai Besar and Kuala Kangsar exclusively to win Malays' votes.

I was relieved when I heard that.

Whom ever is that at the Umno war room who advised DS Najib Razak on the need for the party to remain moderate should be commended.

I was told that Umno will pick its candidates for the by-elections solely based on their credentials and being acceptable among the constituents.

That means they will be chosen because they are deemed to be the best when it comes to serving the people there and not because they are the Umno division chiefs or loudest in spewing racist remarks.

It's a good move by Umno because these by-elections will set the tone for the next general election two years from now.

Despite all those talks about getting back at the Chinese for their tsunami in 2013, Umno has apparently not lost its way by choosing to remain moderate.

For me, it doesn't really matter whether the Umno candidates will eventually win the by-elections or not, but what's more important is that the party has sent a message that it will not be the one to cause the division of this country along racial line.

I know that some people who wanted Umno to turn itself into an ultra Malay racist party were disappointed.

They wanted the most vile of racist characters to be fielded as candidates by Umno in those by-elections.

They argued that it will help the Malays unite and teach the Chinese a lesson.

I'm not really sure of their motives but I know what they wanted is wrong.

Umno will eventually be destroyed if it goes down that path.

Anyway, these people who wanted Umno to be like the Nazi party or the Klu Klax Klan do not understand that Malays are not by nature racists.

Their culture and Islamic faith do not shape them to be such.

They are instead conditioned to be nice people.

Given half a chance, they want to be friends with just about anyone. 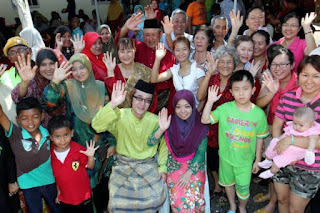 They are so nice as a people that others labelled them as docile, lazy, lack competitive spirit, etc.

Whatever not so nice things you see about them were not because of themselves being Malays.

Those were more personal failings than anything else, okay.

As a people, they are nice.

They don't really mind sharing with you their country, language, identity, etc.

That's just the way of the Malays as a people.

That's why Umno cannot be the vulgar racist party that those people wanted.

The Malays will eventually reject the party if it does become such an entity.

Being racist is not nice, and Malays want to be nice.

Sometimes I suspect that those who want Umno to be racist actually want it to be dead.

They pretend to be on Umno's side but actually plotting and subtly goading it to self-destruct.

It's like planting a virus in a computer by disguising it as something good for the machine.
Posted by Annie at 09:03