Someone sent me this screen-shot of a Facebook posting by Mustapha Kamil Mohd Janor last night, 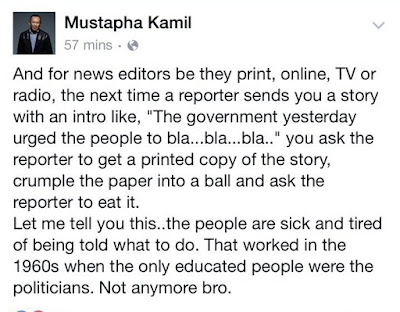 Can't imagine the difficulty of those reporters trying to swallow a paper ball.

I'm glad that Mus didn't tell the editors to eat the unsold newspapers too.

Some of them may choke and die, okay.

Whatever it is, I think I know what Mus was really trying to say.

Of course he didn't really mean it for the newsmen to eat paper balls.

Well, I think he got a point there.

Why write something supposedly pro-establishment but no one cares to read it...or even worse, just irritate or piss off people even more.

I think the same applies to blogging.

Unless of course if you are blogging just for fun like me.

However, I heard he had tendered his resignation and will leave the newspaper by end of this month.

If it's true, Mus is the first one to voluntarily resign from that post, as far as I know.

Group editor of NST is a very important post.

It's like being the captain of a flagship in a naval fleet,

But of course he still needs to take orders from the Admiral who is of even higher rank.

He may wants the newspaper to go right, but the Admiral insists on going left...straight into the longkang.