The hudud thing is just a wayang

There have been quite a lot of noises coming from the Barisan Nasional component parties regarding the hudud bill tabled by Pas president DS Abdul Hadi Awang in parliament last week,

In fact, I think they made more noises than the opposition DAP, PKR and Amanah.

The presidents of MCA, MIC and Gerakan said they will resign from their ministerial posts if the bill gets through, among others.

But I think it's all just a wayang by everyone.

They all know that the bill will not pass through parliament.

At the end of the day, when it comes to voting in parliament, all the BN MPs, either they be Umno, MCA, MIC, Gerakan, or others, they will vote against the bill.

What is happening now is just for show, okay.

First of all, Hadi needs to show his people that he is doing something to get them the hudud thing after getting rid of the Erdogan last year, and therefore made the party religiously purer.

Whether they actually going to really get it is totally a different thing.

"Hey, at least I had tabled it in parliament what. It got rejected because I didn't have the majority. That's Allah's will okay. Not my fault," Hadi will say later.

The Umno guys who allowed the bill to be tabled in parliament are most likely in the whole thing from the start, because they want to make sure Hadi will keep Pas out of the Pakatan Harapan coalition.

"Okay Hadi, we let you put on the show so you look all presidential for your Islamist party. We understand that your Pas people are into that kind of stuff and you need to please them. That's okay. In return, you don't hang around with those PH gang. They are bad anyway. You know that, right?" said the Umno guys.

Of course, all the other BN component parties are now jumping up and down.

Well, they have to do something, right?

They need to look brave to go against the bill, especially in front of the non-Muslims.

The Umno guys knew this and would let them be.

They knew those MCA, MIC, Gerakan and others can't actually do much other than making all those noises.

They even understand the need for all the noises.

Later, at the next BN meeting, the Umno guys will tell the others :

"Hey, relax. Enough of the jumping up and down. We Umno guys are going to oppose the bill with you all, okay. All the wayang is just to keep Hadi and gang away from the dastardly DAP, PKR and Amanah fellas.

"You all think we are nuts to support Pas' version of hudud. To support it is like cutting off our own balls. We are not stupid crazy like the Pas people, okay."

And then everything goes back to normal.

The best thing was that the DAP, Amanah and PKR bosses knew these were happening but all they can do is scratch their buttocks. 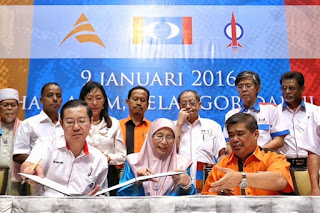 They can't make too much noise because back then, when they were still Pas' friends, they were okay with the whole nonsense.

"It's only for Muslims what. And if you are not doing anything bad, why you need to worry?", that was their line when it comes to hudud back then before the last general election in 2013.

So, serves them right for what's happening now.

Whatever it is, I'm not worried at all over the whole thing.

As I said, it's just a wayang.

Life goes on the way it has always been.

Really. I wouldn't worry a bit.

And don't be too pissed with Hadi and his Pas people for the monkeying around, okay.

They need to believe that they are doing something about the hudud thing. Otherwise, they are going to feel that they are not going to paradise after they die.

Really. I'm not kidding you.

So, cut them some slack, okay.

As for the Umno and other BN guys, they simply have to play along. It's to their advantage after all. So, why not?

The DAP. Amanah and PKR guys?

They will continue to scratch their buttocks.

That's all they are good at, after all.

It's fated that way.

You all, try not to waste too much time over this stupid wayang, okay.
Posted by Annie at 09:43