No need to get all riled up

Been occupied with a family gathering the past week.

Was helping my mother with especially the relatives who came over from Singapore.

Needed to ferry them around for the occasion.

It was quite a gathering.

It was nice to have almost everyone here.

The best thing at the gathering this time was that no one talked about bad things too much.

The most was about a cousin who had some money problem.

We tried to help him but it was a bit difficult.

But we are not going to give up and will try whatever we can.

That's what being in a family is all about.

No one seems to be interested to talk about politics too this time.

The big makan was on the night of the Sarawak election but nobody seems to be bothered by it.

It was a far cry from our family gatherings before the last general election in 2013.

At that time politics was the favourite topic of conversation.

Almost everyone were DAP supporters, including my uncles and aunts whom I knew were MCA members.

Everyone seemed to have something to say about "Ubah" and such things at that time.

Guess, everyone is tired of all that now.

As I previously wrote, maybe people just want to wait until the next election instead of jumping up and down like before.

Why want to waste energy?

Just vote whomever we want when the time come.

After all, life still seems the same after all the political euphoria of those days.

Not much has changed.

Okay, the prices of goods seemed to be a bit high nowadays but I don't see anyone having to change his/her lifestyle.

Well, at least not in my family.

My mother still drinks at Starbucks from time to time.

I only drink there if she belanja me some fancy coffee.

As for the cousin who has money problem, that was because he was careless with his money and not because of anything else. That's normal lah.

Better work hard and enjoy the good things which come with it rather than getting all riled up for nothing.

Why want to get all worked up all the time?

Everyday want to get angry for what?

Can get fat and ugly, that way, okay.

Better relax and enjoy life as given by Allah.

Like today, the best thing that I did was harvesting some ciku fruits from the tree in the house compound.

Nowadays, I enjoy doing simple things like that more than anything else...including blogging, I think.

This is the biggest one that I got, 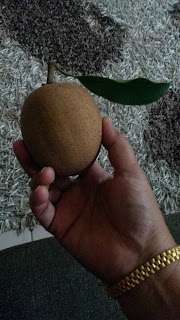