Mahjong and other CNY happiness

I'm going to write more light stuff from now on.

I believe that from now on, for my side of the political divide, the serious enlightening ones should be written by those smart young people tasked with handling the Umno cyberwar machinery.

That way, the rest of the over three millon Umno members could be properly led by those geniuses on how to combat the Pakatan people in the twitter and Facebook and etc etc as had been envisioned in the cyberwar plan by the likes of brilliant minds such as Ahmad Maslan and others.

If amateurs such as myself were to continue writing the serious stuff, then the risk would be that Umno members, eager to fight the cyber attacks of Pakatan may get confused as my way of thinking may not be in sync with the thoughts of the Umno leadership.

It is better for everyone fighting the cyberwar for BN to work with a single mind, led by those young geniuses who are sincerely committed to the struggles of the party...I guess.

It's what DAP had been doing all along. The results have been astounding for them as over 90 per cent of the Chinese electorates voted for them or their allies (including the Taliban-like Pas) in GE13.

Just imagine if Umno could work with the same strategy and the Malays are united like how the DAP unites the Chinese.

Seriously, I think that would be the best.

Now for the real subject matter of this posting.

A fluff, but it's more fun than all those nonsense I wrote above.

Ya, it's about the five things I love most about my Chinese New Year celebrations this year,

1. My family had seafood steamboat for the New Year Eve reunion dinner which enabled me to join in. No pork. Normally my grandmother cooked a separate dish for me.

2. My grandmother made me a beautiful dress for the occasion. It's been a long time since she last made one for me.

3. For the first time ever, I beat my mother and aunts at several rounds of mahjong last night. They are experts, yet I made quite a tidy sum at the end of the rounds. I know, I'm not supposed to gamble but this was just quite a bit of fun. 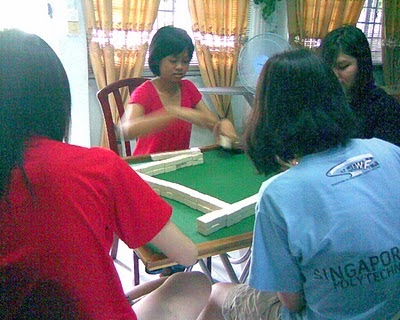 4. My grandfather was not as grumpy as usual. He even seems happy when my mother handed him the ginseng wine given by my father for the occasion. My father bought the thing when he was in Korea the other day. My mother said it's good for blood circulation.

5. The Chinese guy send me pictures of his family's reunion dinner on New Year Eve. The first time he ever did that :-)