Ismail Sabri better be aware of the ghosts

So, Ismail Sabri has been appointed PM and he will be sworn in tomorrow.

I'm not sure whether to congratulate him because I strongly believe that it's not going to be easy for him.

For one thing, he has that confidence vote to go through in Dewan Rakyat with such paper thin majority.

The frogs may jump again over the next few days.

Some may even see the start of his premiership as an unfortunate event.

My beloved sent me a message just now reminding me that it's now the Ghost Month, that time of the year when the gates of hell supposedly open up, allowing ghosts and spirits to wreck havoc on earth. 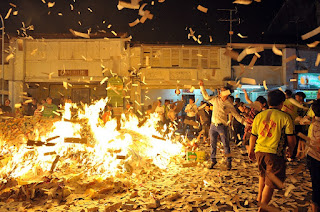 This year, the Ghost Month is between Aug 9 and Sept 6, with the climax Chung Yuan or Hungry Ghost Festival on Aug 22, which is the day after tomorrow.

My beloved believes it's not the best time for Ismail Sabri to open shop in Putrajaya.

Of course, being a Muslim I don't believe in all that but my beloved is a Cina Bukit and thus was really concerned that Ismail Sabri's administration starting itself at this time of the year is not going to be good for the country.

Don't know what to say lah.

But I do understand the culture. If you want to know why I say that, please click on this link to my old post on April 12, 2014;

But please don't confuse between Qingming and Hungry Ghost Festival. They are different, okay. Go google yourself to check that out.

No, it's not because of the ghosts.

You see, even if he survives the confidence vote, he would likely has to call for a snap election once the pandemic crisis is over, which I believe will be within just a few months from now.

The vaccination programme is doing very well and we may achieve the herd immunity before the end of the year.

We are even starting to relax the movement restrictions quite a lot these past few days.

The pressure will be so great for Ismail Sabri to seek a new mandate when the situation permits the country to hold a general election.

I think we all would want that.

And you know what, I don't believe Ismail Sabri will be the Umno's PM candidate going into the general election.

It would certainly be someone else.

So, Ismail Sabri should do his best with this relatively short time as PM to do good so that he will be remembered as a good guy.

Well, for one thing, he can do his best to bring the country safely out of the pandemic and not goof up the coming budget.

That would be good enough.

I know the guy a bit when I was working in Pahang and I think he's not such a bad person.

Not top notch, but as a temporary PM okay lah.

Eh, enough la for now. I need to have dinner now.