Chinese should push for a change of government

Covid-19 is back in Wuhan

The government has once again confined residents of entire cities to their homes, cut domestic transport links, rolled out mass testing and tightened overseas travel restrictions.

Yes, by Malaysian standard, those are indicators of #kerajaangagal.

So, that's why I said the Chinese should follow Malaysians who are now pushing for a change of government.

They should gather at Tiananmen Square and carry black flags.

If the PLA roll in with their tanks like in 1989, they should lie down on the road to stop them. 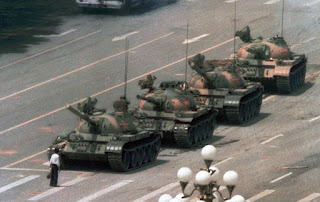 If they want, they can borrow Anwar, Guan Eng and Mat Sabu as their leaders. Make them lie down in front of the tanks also.

That should stop the pandemic. Right?

Hey, I also want a change of government (in Malaysia and China) but not now amidst this pandemic.

I don't want the disruptions as they could cause more lives to be lost.

We change the government now, then the new one will want to put their people in charge and that I fear will cause chaos to the ongoing effort to fight the pandemic.

They will try to prove that they know better and undo things already put in place by the current team.

New health minister, new minister in charge of vaccine, new health DG etc, all trying to do things differently and that I believe will only make things worse.

I don't want that for the Chinese too, actually.

The headline of this post is only just to tease them a bit.

Seriously, it's already too bad that  they have to make do with being ruled by the communist dynasty for now.

I think they simply have to bear with that for now and be focused on preventing the pandemic from getting worse.

Yup, the Chinese and their evil communist government should concentrate on doing that instead of threatening Taiwan and bullying Hong Kong and Xinjiang people.

As for Malaysian Chinese, they better stay at home and be safe as much as they could.

Same with other Malaysians.

Don't be crazy and go out to the street to protest against the government just because Guan Eng tells you to do that.

You kena Covid nanti, Guan Eng will not come and help, okay.

After all, the guy is also now facing corruption charges, just like the gang from Umno.

Oh, Anwar will also not do anything to help you either. The guy can talk only.

Don't be like those politicians who are over eager to take over the government now while the rest of us are fearing for our lives and livelihood.

Let's just pray and do our best so that this pandemic will be over soon and we can have a proper general election to properly change the government.

Better that way, isn't it?