Of late, I've been enjoying the power-transition drama for quite a bit.

It's so amusing to watch some people squirming over the possibility of a cooperation between Dr Mahathir and Umno.

There was Anwar making all sort of statements to convince people that everything is alright in Pakatan and he is indeed going to be the PM.

Then, there was Guan Eng getting all upset with anyone who mentioned the mere possibility of a Pakatan's collapse.

That Pas-initiated vote of confidence motion for Dr Mahathir plan will really turn the table upside down for them.

On the Umno side, those who don't want to see a Mahathir-Umno tie-up were also being comical.

Okay, some were genuinely concerned about the possibility of Umno being conned by Dr Mahathir, but many (especially the very vocal ones) were upset purely because such a cooperation means they and their personal interests will be pushed aside within a rejuvenated Umno.

Yup, people like that Lokman Noor Adam guy will be irrelevant if there's no more Mahathir versus Umno fight.

Honestly, I see the whole thing as being quite funny.

I think Dr Mahathir also think it's funny. He had been teasing everyone when asked to comment on all the drama.

Now Anwar even said he's willing to wait till after the Apec meeting towards the end of the year to take over power, which is actually him buying time to avoid the Pas' confidence motion for Dr Mahathir scheduled for the start of parliament sitting next month.

For me, the game is simple - any side which actually try to table a motion of confidence or no-confidence would have the number. 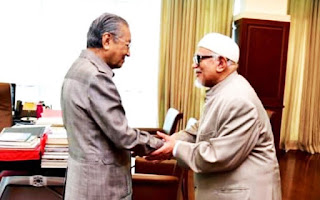 My reading of the present scenario is that due to Pas' boldness, I believe Dr Mahathir really have the support of the majority of MPs from both sides.

He actually can set-up a new coalition government if push comes to shove. And of course, if that happens, Anwar along with his supporters, in particular DAP will be out of the government. That's why they were so upset about the whole thing.

Well, can't really blame Dr Mahathir because I strongly believe that if Anwar is the one who have the number, he would have already tabled a no-confidence motion against the PM so that he can take over the whole show.

And once he's in power, Anwar will go after Dr Mahathir and his family, Umno and others whom he deemed to have wronged him in the past.

I have no doubt that will happen.

Those Umno people who think that they can survive the next three years before GE15 without cooperating with Dr Mahathir should think again. If Dr Mahathir falls, they will fall along with him.

I highly doubt Umno can survive that three years if Anwar is in power. It will almost certain to be banned for all sort of things. Anwar's supporters, in particular DAP will see to it.

Really guys, DAP will show you all no mercy, once they have the full power courtesy of Anwar's rule.
Posted by Annie at 12:00