Dr Mahathir is right about the AirAsia case

I couldn't agree more with Dr Mahathir when I read this yesterday,

says “offset” is not bribery

He said it is normal to ask for an “offset” in business dealings provided the money is not taken for personal use.

Dr Mahathir said even the government would ask for an offset when making purchases.
“For instance, when we buy planes we will ask for an offset. Whether you consider an offset as bribery, it is up to you, ” he told the media after a session with Education Ministry staff here.
Dr Mahathir, who was asked to comment on the allegations against AirAsia also questioned why an offset should not be accepted when making a purchase on a high-priced item.
In business, an offset is when losses in one business are made up for by increases in another, or when payments due and owed are used to cancel each other in accounting.
I have from the start of this issue felt that AirAsia was not guilty and that's why I posted this,

Seriously, I believe that many of those who joyfully jumped at the opportunity to accuse the budget airline of wrong doing that day were mostly its old enemies.

They simply whacked AirAsia as if it's already guilty.

I never like it when someone was judged  even before being given the right to defend himself/herself.

In this case, it's basically AirAsia being judged guilty because Airbus sad so and so to the UK authorities to get its neck off the chopping block.

AirAsia was never even contacted by the UK authorities to defend itself.

You can read about that here,

by SFO over Airbus case


And they did try to explain what the facts of their case.


Their statement today noted that Caterham F1, the company alleged to have been sponsored improperly by Airbus, was at the relevant time a Formula 1 Racing team that had gone round the globe promoting amongst others AirAsia, AirAsia X and Airbus.
It added that throughout the period when the duo were shareholders in Caterham, the company made no profits and was eventually disposed of in 2014.
It stressed that Caterham was a company for branding exercise and not to make profits.
That's the "off set" thing there, I guess.

Anyway, I'm glad that Dr Mahathir said what needed to be be said about the case.

Politics aside, when he's right, I'm going to say that he's right. 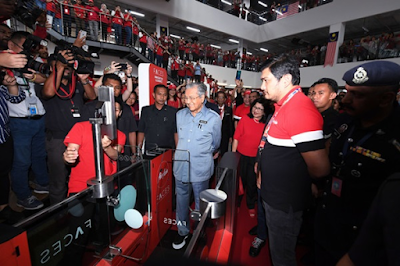 Well, I hope AirAsia will continue to fly and its thousands of staff as well as others can continue to "cari makan".

The country needs Malaysian entities such as AirAsia to do well, especially in these troubled times.
Posted by Annie at 09:18