I'm in Semenyih since yesterday.

Just observing as the campaigning reaches the end.

This is the first by-election that I'm on the ground since the one in Sungai Besar in 2016.

And it's the first time I watched a true BN-Pas political cooperation in an election.

For me, that's the most significant thing about this Semenyih by-election.

Honestly, I think Pakatan is in trouble because of it. The same as they were in Cameron Highlands and likely in future elections.

I was at the Pakatan's gathering near Tesco Semenyih yesterday evening where Dr Mahathir and others were there for the final push before the polls on Saturday.

It was actually kicked of by a performance by popular singer Jamal Abdillah. Seriously, okay.

And the guy sang two songs. I don't know the first one, but the second one with slightly modified lyrics was titled "Kau Lupa Janji" (You forgot your promise).

I even suspected that Jamal Abdillah was a BN's mole at the Pakatan's function.

I'm not very good at estimating the number of a crowd, but I noticed that at least half of those present were wearing the red Pakatan or Pribumi Bersatu t-shirts.

I don't think that having to fill up half of the venue with party workers was a good sign.

Then there's a stall less than 50 meters away from the stage selling Apa Malu Bossku t-shirts and it's doing, I believe, good business. There was some sort of a pasar malam near the venue which probably helped to boost the number of crowd.

His speech was focused on three things which were
- Najib and BN bashing.
- Telling Malays not to fear DAP.
- Pleading to the Malays not to let Dr Mahathir down.

Seriously, it was an awkward speech. Mat Sabu tried to be clownish as he always did but now that he's a minister and not an opposition leader anymore, he sounded more stupid than ever instead of being funny.

I didn't wait for the other speeches and left for Bandar Sri Putra about 20 minutes drive away to check on the BN's ceramah featuring Mat Hassan and Pas deputy president Tuan Ibrahim Tuan Man.

By the time I arrived, Tuan Ibrahim was already halfway through his speech. I completely missed Mat Hassan's.

I particularly like the part where he asked for the audience to be honest with themselves on what have they gained from the change of government last year.

I know and like Tuan Ibrahim from my days in Pahang and I believe the guy is honest. His demeanour is that of a wise elderly kampung man. Nothing like Mat Sabu. 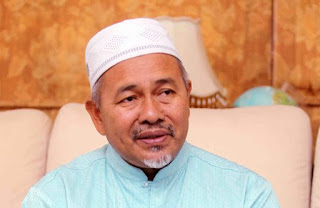 And I got chills down my spine when he read the doa at the end of his speech.

The first time ever that I listened to a Pas leader praying for a BN victory.

The crowd at the housing estate field looked more genuine than the Pakatan's one.

The BN supporters clapped to Tuan Ibrahim's speech while the Pas ones cried "Allahuakbar".

Pas' Unit Amal members were also in full force managing the traffic near the venue. It was as if the candidate on their side is from Pas instead of BN.

Well, I have a feeling that BN may win this one as it did in Cameron Highlands.

But then again, as I pointed at this earlier post


Pakatan have a buffer of over 8,000 votes majority from the last general election less than a year ago.

That's very hard to turn around.

But who knows, if it really turns around, then we may expect another roller coaster ride all the way to the next general election four years from now.

Okay, here's Jamal Abdillah and his song at the Pakatan's gathering,