Battle for the Malays of Semenyih

This doesn't seem to be right,

“It is not going to be easy. This is going to be an uphill battle as we are faced with a difficult task," the Home Minister told a press conference after a meeting with Bersatu and community leaders ahead of the by-election set for March 2.

By right the by-election should be easy for Pakatan as it won by a huge 8,964 votes majority in GE14 less than a year ago.

It should be noted that the incumbent almost always wins in a by-election.

Well, maybe Muhyiddin was not so confident because the other day

Azmin is confident of victory in Semenyih

I think we should look closer at Semenyih and see whether Muhyiddin or Azmin is right.

This is the racial composition of the state constituency of 54,503 voters;

BN had held the seat all these years even when Pakatan started to rule Selangor in 2008. It only lost there for the first time in GE14 last year.

Basically, it's a Malay majority constituency which used to be an Umno stronghold in Selangor.

Therefore, I think the big question of whether the bulk of Malay voters have turned around again to now support BN will be answered in Semenyih.

The BN's victory in Cameron Highlands by-election gave a glimpse of that, but some may argue that it may not be so accurate because BN had fielded an Orang Asli candidate which swung around the community's significant number totally in its favour.

So, Semenyih will be a more percise barometer for the Malay votes.

Considering the Malay voters factor, I think the outcome of this by-election will be more crucial than Cameron Highlands as Pakatan, especially Pribumi Bersatu which will be fielding its candidate could not afford to lose it.

If it does so, then it's confirmed that Pakatan is sliding further down and set to lose more support among the Malays.

A more extreme analysis may even conclude that such an outcome points to Pakatan not even be able to survive till the next general election.

I also think that this is going to be a fight for survival for Pribumi Bersatu which is trying to replace Umno as the main party for the Malays.

If it fails to defend the Malay-majority Semenyih, then it will lose a lot of credibility and may not be able to hold Pakatan together as it does now.

But then again, the over 8,000 majority it won there in GE14 less than a year ago should be a good enough cushion for Pribumi Bersatu and Pakatan to win the by-election.

It could also be safely said that Pakatan already have the over 30 per cent votes of Chinese and Indians in the bag.

On top of those, I'm also quite sure Pakatan will go all out to defend the seat, and use whatever means to win.

Well, for one thing it did use government assets to campaign in Cameron Highland and therefore I think they may do the same again in Semenyih.

I'm also quite sure that Pakatan will try to exploit Najib's trials which start this week to remind people, especially Malays in Semenyih that BN, or to be more precise Umno is bad.

BN will find things to be tougher this time as they don't have much resources after the post-GE14 crackdown where its accounts were frozen.

No matter how one's to put it, the odds are still not in their favour.

Nonetheless, I think it still boils down to just how the BN's leadership approach the by-election.

If Mat Hassan and the gang remain as smart as they were in Cameron Highlands, then they may spring another surprise and completely turn the tide around.

A right candidate and smart campaign strategy may do the trick again, I think.

Then of course, there's the cooperation with Pas which worked beautifully in Cameron Highlands.

Then there's also the fact that Pakatan has became arrogant and screwed up on so many fronts since winning GE14.

There's no doubt that many Malays are getting disillusioned with Pakatan, especially over its handling of issues such as ICERD and the tragic death of fireman Adib. 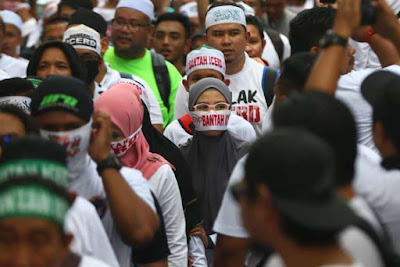 And of course there are those Pakatan's broken promises and the failure to improve things, especially for the Malays after winning GE14.

Those may help BN a lot in this coming by-election just as they did in Cameron Highlands.

Personally, I think Azmin was not wrong to feel confident about Pakatan winning in Semenyih because it's after all the incumbent with a huge majority cushion.

However, Muhyiddin, being the former Umno deputy president should know the Malays' sentiment better and that the danger of Pakatan losing to BN in a Malay majority constituency such as Semenyih is currently very real.