BN has a slight edge in Semenyih, a bit about flying cars

Many things happened this past week but I have not been writing here because I was not well.

Well, let me start with the Semenyih by-election which is now entering the final phase of its campaigning period.

I was there on the ground to look around a bit, so maybe I can tell you all what I saw and heard.

I think it's going to be close with BN having a slight advantage.

I say "slight" because PH has a relatively huge over 8,000 majority in GE14 less than a year ago.

It's not going to be easy to turn that around, especially in a by-election.

As I previously pointed out, I remember only three by-elections where the incumbent lost - Lunas in 2000, Kuala Terengganu in 2008 and Teluk Intan in 2014.

Still, the campaigning on the ground, as I saw it indicated that BN has more than just a chance to win.

Well, there's the apparent general dissatisfaction of the Malays who are the outright majority (68 per cent) there towards PH for its unfulfilled promises and tilt towards abolishing their rights.

It was also said that the BN's choice of candidate was more agreeable to them than the one from PH.

Then there were talks that many Indians there are switching side to BN because they were unhappy for not really getting much after PH won GE14.

Some of the Chinese were said to be unhappy too.

Well, that's what they told me.

As I see it, the BN's campaign looks not so bad at all despite some stupidities such as the one on nomination day.

I guess the reemergence of personalities who screwed up BN's GE14 campaign this time should be expected. After the win in Cameron Highlands they must have felt that they can make a comeback and start leeching again.

Hopefully Mat Hassan is smart enough to stop them so that BN and Umno could have a better image without such characters in future.

Despite such hiccups, BN campaign still looks better than PH.

The cooperation between BN and Pas also looks good despite Dr Mahathir's earlier assertion that it's not going to be so. 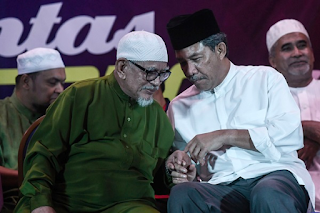 I even met outstation Umno and Pas people who were staying and campaigning together at a kampung there.

Then there's Najib running around in Semenyih, and he does get the crowd such as this one,

Well, I think I'll update this by-election later as I'm planning to go to Semenyih a bit more before polling on Saturday.

Meanwhile, the PH ministers continue to be not so intelligent.

Come on la, even if it's for real, try la not to talk about it before we really have it.

Or at least wait until you got all the details together.

If PH really lose in Semenyih, I dare to say that it's partly due to these sort of stupidities on the PH's side.

See, BN and PH both have their stupid parts. All the same, actually, except this flying car thing being a bit on the extreme side.

Ehh, I need to get up and get ready for work now.

Will try to write again tomorrow.