So far, this is the most significant news from the ongoing Umno general assembly;


I was told that this had been agreed upon by the party's supreme council and will be turned into a motion to be later on endorsed by the general assembly .

The next Umno election, scheduled after the GE14, which is in a few months time, will see no fight for the president and deputy president posts.

The general assembly has the power to do that despite the party constitution saying everyone can challenge for anything.

The motion for it, however must be specific, that it's confined for just the next party election.

Basically it's a lock down.

My understanding of this whole thing is this,

- Najib will remain as Umno president for another term no matter what happen in the near future.

- Zahid is safe as Umno deputy president for the same duration....unless Najib later on decides otherwise. Zahid better not be naughty like Muhyiddin.

Other things that I think will happen as a result of the lock down;

- Hishammuddin will remain as the vice-president for the next party election....unless Najib later on decides otherwise.

- Khairy will be the firm favourite to take up one of the other vice-president posts and will be seen as the number two of Hishammuddin as the upcoming new top of Umno line up....unless later on Khairy himself decides he is better than just being a Hishammuddin's side-kick. 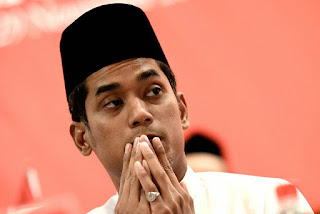 - One of the Sabah guys will take up the other vice-president post. My bet is on Salleh Said Keruak, even though I wish the guy could be Anifah Aman.

- Shahrizat can keep her Wanita chief post until she's 179 years old or maybe even beyond that. Seronoknya.

Of course, all the above are subjected to BN winning the coming general election.

If BN lose....honestly, I don't think there will even be a next Umno general assembly if that happens.

Hahahaha....so much for the most important thing for the ongoing general assembly being the GE14.

Told you all so.

See, they are talking more about the party election than the general election.

Heck, I'm not even an Umno member, so why should I care too much.

Just being an observer, okay.

By the way, I spent a bit of time at PWTC the past two days.

Simply jalan-jalan and look around.

The place and atmosphere were still more or less the same.

Met some friends from the good old days.

Quite nice hanging around with them at the mall across the street.

They torn down the place where I usually parked my car when attending previous Umno general assembly.

So this time, for the first time, I went there using the MRT and LRT.

Took the MRT at a station near my office, switched to LRT at Merdeka-Plaza Rakyat and then all the way to PWTC.

Quite easy and nice.

Less than RM5, no jams, parking and toll fees.

Need to get up and go to work now.