Media Prima after the civil war

There were a few of these sort of comments which landed at this blog over the past few days;

I believe the commentators were referring to this piece of news;


At a town hall meeting yesterday at the Media Prima head office in Bandar Utama, Kuala Lumpur, employees were encouraged to go on unpaid "career break leave" of six months to a year, or work half a month for half pay.
Various sources told The Malaysian Insight that employees who had served the group for at least three years could apply to do one or the other immediately. Those seeking a career break will be able to commence leave next month.
Earlier this year, the media conglomerate introduced a voluntary separation scheme for employees above the age of 50 to cut operational costs.
Sources said the management spent the minutes in the townhall  talking about the challenge new media presented to traditional media.
They urged the employees to cooperate in the company's transformation plan to adapt in the internet era.
Well, I guess this is partly the outcome of the


Since then, that guy FD Iskandar, the then chairman who tried to steer the media group to safer water and was mercilessly whacked for his effort had left. 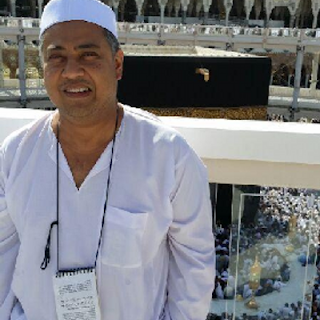 Well, I guess that's the way it is at Media Prima.

A few days ago I received this screenshot of a WhatsApp message which I believe tells something about the Media Prima's newspapers ; 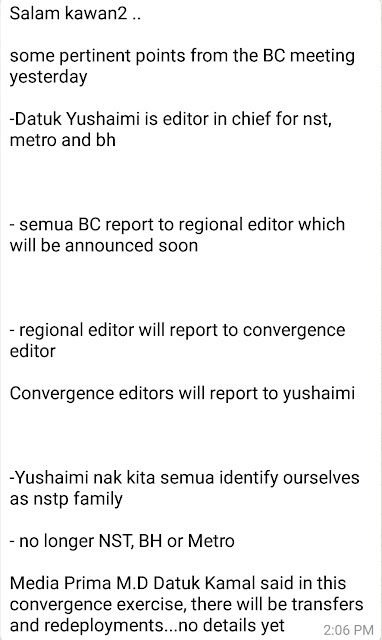 Well, I guess it's something like a three-in-one newspaper....or is it one-in-three newspapers?

Anyway, it may be a brilliant move.

If we look at this daily newspapers circulation figures from end of last year, those Media Prima newspapers were suffering;

Now that they have combined the newspapers, the daily circulation figures should be like this,

Still, this new NSTP newspaper need to push more to catch up with Sin Chew Daily's 316, 564.

Sometimes it puzzles me why the Chinese newspapers are doing relatively well compared to the others.

Chinese made up at most just 30 percent of Malaysians, and I think less than half of them can read Chinese.

Yet, their newspapers are not doing so badly.

The only answer I can think of is that the Chinese read more than Malaysians of other races.

Or maybe their newspapers don't have too much politics, back stabbing and such.
Posted by Annie at 22:32