On my way to work the other day, I stopped at the NKVE Petronas station to top up my Touch n' Go card and withdraw some cash.

As I was walking to the ATM machine, a lady stopped me. She looked worried and her teenage son who was with her looked sickly.

So, I dialed the number and gave my phone to her.

A few minutes later the taxi driver arrived at the petrol station and gave her the phone.

The taxi driver had actually found the phone and was on his way back to return it.

The lady was very grateful.

I was a bit puzzled though as to why she took a taxi to go to a petrol station.

She told me that she stays at a PPR (low cost flats) in Lembah Subang. 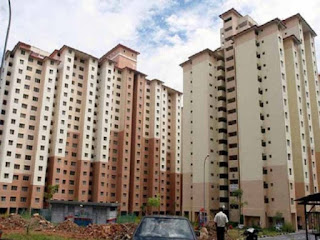 It's about five km via a walking short-cut path from the petrol station.

I went on to withdraw some cash from the Maybank ATM while she and her son went to a BSN ATM.

However, after that I saw her looking downcast as she walked away from the machine.

"Kak okay?" I asked as I approached her.

I asked how she and her son wanted to go home and she said they intended to walk.

After quite a bit of persuasion she agreed.

It's quite out of my way to work but I'm glad that I offered her the ride.

The drive to her home took about half an hour, and on the short trip I learnt a few things about the poor lady;

- The lady is 48-years-old
- The 11-year-old boy with her is the youngest of her nine children
- Her hometown is somewhere in Perak
- After school, she worked as a domestic helper
- She married her late husband, who was from Kelantan soon after that
- Her late husband drove a taxi and did some small business to earn a living
- Their first home was at a squatter area. Her husband later on bought a low cost house but unfortunately, due to financial difficulties, they lost the house and had to rent the flat at the PPR for the past 10 years. The rent is RM250 per month.
- Her husband died along with a friend in July last year after their pick-up truck crashed head-on into a trailer near Gua Musang. They were on their way to Rantau Panjang to get supplies of goods for their small business. The accident was reported by the media.
- Of her nine children, six are still staying with her. Three of them are still at school.
- Her children who had left home are themselves struggling with their life and can't help her much.
- She now earns a living to support her family by sewing tudung, baju kurung and baju melayu.

Listening to her life story, I felt whatever difficulties I face in my life seemed so trivial.

The lady, with very limited education and prospects, have to shoulder such a heavy burden.

It made me wonder why so many people are complaining so much about life while their problems seem minuscule compared to those of the lady.

She did not actually complain much except saying that food and household goods are quite expensive these days.

When we reached her flat in Lembah Subang, I handed her some money which she very reluctantly accepted.

Thinking back, I wished I had given her more. The amount I gave her was actually just the usual I spent to buy lunch for friends at a Japanese restaurant. Very thoughtless of me.
Posted by Annie at 19:29