So, I was right when I wrote this,

I was told that this had been agreed upon by the party's supreme council and will be turned into a motion to be later on endorsed by the general assembly .The next Umno election, scheduled after the GE14, which is in a few months time, will see no fight for the president and deputy president posts.The general assembly has the power to do that despite the party constitution saying everyone can challenge for anything.The motion for it, however must be specific, that it's confined for just the next party election.

Motion on no contest for top two Umno posts passed


Well, sometimes I did get things right.....even though at some of  those instances I actually wished I was wrong.

If you want to know what I think of the whole thing, just click on the link to that previous post of mine above and read it again.

What else can I say, right? 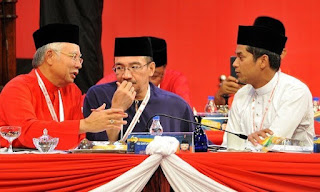 Anyway, a friend told me the other day that he doesn't think this blog makes much difference as not many people read it anymore.

He said this blog used to receive over a hundred comments per post but now reduced to less than 30 or fewer.

Anyway, it had never been my intention for this blog to be influential or popular. It's just me recording my thoughts of what's happening around me.

Whatever it is, I'm quite glad that my friend think this blog is nothing much. If it is so, then I don't have to worry about being sued or closed down.

Nobody read it what.

And I can write more about my friend's boss whom I whacked quite a bit in the past.

He should be okay with it I guess.

No one is going to read it what....hahaha.

By the way, I actually wonder why would anyone read hundreds of comments on a single post anyway. A bit too much, don't you think?

If less than 30 or fewer, then not so tiring isn't it?

Here's one of the favourite songs of a lovely boy with autism,