If only we can play the North Koreans (updated)

Please read these for the latest on North Korean craziness,


Anonymous6 March 2017 at 01:56
In Malaysia, selection to team sport - as in education or government employment - is by race and not merit.

This has lowered the overall prowess of the nation - the growth from the previous 20 years has mainly been via debt, easy money from petroleum. This allowed this who are not very smart, to assume that they were very smart and were bringing results - these 'results' were built on paper stilts.

Can Malaysia pivot? Let's see......
I don't think this is entirely true.

I think we really select our sports teams based on merit.

This is so, because I believe that it's just so happened that there are more Chinese who play badminton while more Malays play football.

Malays like badminton too but they prefer to be the spectators, the same way Chinese like to watch football but not so much on being the players.

In between we got the Indians and those of other races, whom we all cheered together too,

Really, that's the way it is in this country.

Only those who themselves are very racially prejudiced can't see that.

We also honoured our sportsmen and sportswomen based on merit.

I believe that in education and employment, we are also moving in that right direction.

Yes, there are still racists among us, but I believe that we good people outnumbered them and one day, not long from now, will overwhelm them.

Given time, I think all those racial complaints will be irrelevant.

We just need to be patient on this.

We should be more positive about ourselves and our country.

If there are bad things, like our football, we should try to fix it, instead of just complaining and being negative about it.

We are really not too bad, okay.

Malaysia is not so bad. 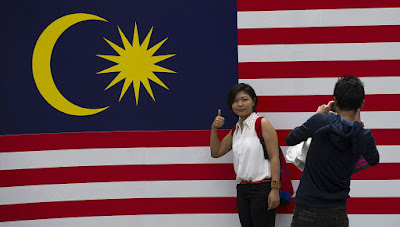 We are even quite brave.

You all can read about it at Rocky's latest here;

Well, this part is a bit too bad though,

Okay, I understand that it's a bit too dangerous to let our footballers play over there.

Don't know what other crazy stunts the North Koreans may pull on us considering the strained ties.

Our players may not even dare to wipe their sweaty face with a towel after the match.

However, if only we can get to play them at a neutral venue.

I think our footballers would be more motivated than ever to play well in such a match.

It's really for the country's honour, you see.

Seriously, I think they will go all out, considering the circumstances.

And we all, regardless of race or religion will be united in cheering them on.

We will be at the height of our patriotism, watching our team play those dastardly North Koreans.

I'm sure of that.

Most importantly, the whole thing would be very good for our national unity.

Well, of course, we will also hope that if we can't win the match, the North Korean team will not beat ours too badly.

Hopefully it's not five zero or something like that.

But still, it's not totally impossible that we can win.