Did the necessary and then finished up some works which I should had done earlier.

I was delayed from doing them because I was tied up outside with an old friend the whole evening.

We had dinner and after that a very long teh tarik session.

We talked about a lot of things and of course they include politics.

Of all the things that we talked about, a story that he told me made the most impression as far as I'm concerned.

It's about what happened in a Wassap group that he is a member.

The group focused on organising a Quran reading schedule among the members.

Each member was to read a portion of the Quran for a whole month and those portions in total covered the whole holy book. 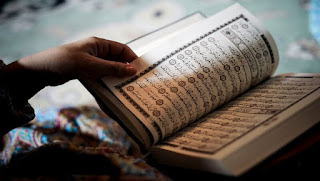 That way, their combined effort made the Quran being wholly read every month.

My friend said the conversations in the Wassap group were almost strictly on reading the holy book.

He said as more members were included in the group, the conversations started to veer bit by bit to other topics.

It got to a point where politics were also discussed by some of the group members.

My friend said a particular member became so vocal at whacking PM DS Najib Razak that it cause quite a lot of discomfort for most of the others in the group.

Some of them repeatedly but gently reminded that particular member that the Wassap group was actually meant for them to discuss the reading of Quran and not politics.

Their reminders were however ignored and that particular member continued with his tirade.

It reached a point when one of them, who can't stand it any longer, posted a message which sounded something like this ;

It turns out that the anti-Najib guy was an operator of a National Service camp which was closed because something was not right at the place.

That post opened the floodgate for many other not so nice queries from the other Wassap group members such as whether the guy was still being chauffeur driven in a Mercedes and even how he got the contract to operate the camp in the first place.

Please don't get me wrong. I'm telling you all this story not because I want to highlight how bad is the anti-Najib guy but rather to share a reminder for all of us not to go overboard when we whack someone that we dislike or even hate.

Honestly, I'm quite concerned with the tone of comments that I received for my postings in this blog but I still published most of them because I believe in freedom of expression and speech.

I hope you all can reflect on the story above and try not to go overboard like that guy in the Wassap group.

As the religious Muslims often say,

Roughly translated ; Do not shame others and Allah will not reveal our shame.

Sorry, I'm not very good on religious matters, but that's more or less how I understand it.

I also understand and believe that Islam encourages Muslims not to go to extreme in anything.

This, for me applies in politics too.

Really, it's not good to go overboard because the bad things we said now about others will likely later on reflect back on ourselves.

We as humans are not perfect.

So, before we say bad things about others, we should first ask ourselves whether we ourselves are so clean of sins.

Maybe that will help us remember not to go overboard with what we want to say.

One day, we are all going to die.

Maybe at a point, towards the end of our life, we may regret what we said about others.

At that time, we may want to say sorry.

I'm sure it will be very hard to do so if what we had said was so terrible that it hurts the other people so much.

I think if it's me, I may not be able to die in peace if the person whom I seek forgiveness from refuse to accept my apology because what I said was too terrible and unforgivable.

I better go to sleep now.