I think it was a rather quiet Christmas today.

Well, maybe it's just me, but there seems to be less enthusiasm in its celebrations this year.

For instance, compared to previous years, not many of the blogs which I checked today made the effort to post Merry Christmas greetings for their readers.

I have mine at the top right corner of the web version of this page for today.

Just a small one.

Maybe because this is not a very good year for a lot of people.

Nothing much to really cheer about, I guess.

Actually, it's not a very good year for me too.

I got quite a number of problems this year.

A lot of uncertainties too.

It has its ups and downs.

Hopefully things will be better next year.

Anyway, today I took a boy, who is with autism and his sister on a drive around KL.

They are from outside KL and just here for the school holiday.

I thought of taking them to the Aquaria at KL Convention Centre, but when we arrived there we discovered that the place was packed with people and the queue for the tickets was too long.

I estimated that it would take at least an hour at the queue to get the tickets to enter the Aquaria.

I can't do that as the boy would get restless.

His autism is of the moderate level.

He can't speak much too.

His sister had given him a T-Shirt with autism paraphernalia to wear for the day so that people would be more understanding when they see him acting differently.

So, we went on a walk along the Bukit Bintang - KLCC Pedestrian Walkway  instead.

It was quite fun.

Actually, it was the boy who led his sister and me along the walkway, and without planning it, we ended up at the Pavillion.

It was my first time there.

We walked around a bit before resting at a Baskin & Robbins for ice-cream. 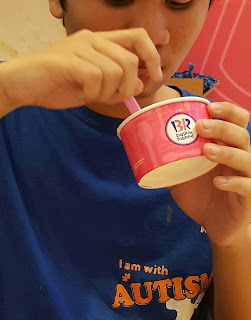 After that we walked back to the KL Convention Centre.

The queue at the Aquaria was still very long. 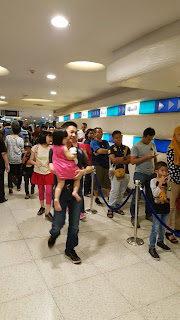 So, we abandoned the thought of watching the fishes and drove off for makan elsewhere.

All in all, it was still a satisfying Christmas Day outing for me and the kids despite not being able to get into the Aquaria.

Maybe I will try taking them there again some other day.

I have never been in there myself.

Someone recommended it to me a few years ago.

For now, I will just show the kids the video of the place,

Okay, hope it was a pleasant Christmas Day for you all too.
Posted by Annie at 22:53