Attacks against Dr Mahathir and Daim may have been stopped

Received a call from a friend who is part of the PMO's media team yesterday morning.

He told me that the stupid attacks against former prime minister Tun Dr Mahathir Mohamad and former finance minister Tun Daim Zainuddin have been put to a stop. 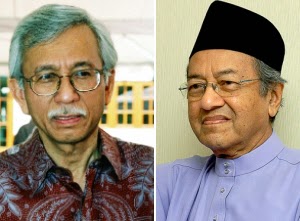 "Those attacks were not initiated by us but by some assholes outside the PMO.

"My boss had a big fight with them over it and he won.

"That's why he managed to put a stop to it," said my friend.

I asked him to tell me who is the real mastermind behind the attacks but he declined to go into details.

I double checked with a journalist friend who works at one of the mainstream media newspapers and he too believed that the attacks had been called off.

"Just a few days ago that short PKR guy Shamsul Iskandar Akin had a press conference in Putrajaya after his statement was taken by MACC over the Daim case. My news editors were told by our big boss Datuk (censored) not to use the story," he said.

My friend's newspaper is one of the mainstream media outlets which had been highlighting statements by opposition leaders, particularly those from PKR as well as Umno hatchet men such as supreme council member Datuk Mohd Puad Zarkashi in what appeared to be a smear campaign against Dr Mahathir and Daim for being critical of PM DS Najib Razak.

I am not actually 100 per cent sure whether what my friends said were true but for now I am willing to be positive about it.

Who knows, maybe the good guys in PMO are really winning the fight there and common sense will prevail.

At least that's what my friend from the PMO think is happening.

I will wait for a while more to see what will really happen.

If the wrong people win the fight at the PMO, then I will totally pull out from supporting Najib.

I really pray that will not happen.

There is no way I am going into the fight against the opposition being led by the crooked idiots who thought attacking Dr Mahathir and Daim was a good way to shut them off.

That was really stupid as I put it here,

Umno will not survive a civil war

For now, maybe my prayers were being answered.

Alhamdullilah.
Posted by Annie at 11:14