Malaysia's root cause of racial and religious problems

This is an interesting post in Another Brick in the Wall blog,

Condemn, YES but NOT Charlie!

It's quite long but I feel it makes a good read.

The terror attack in Paris has indeed triggered a tidal wave of Islamophobia which apparently even reached our shore.

People who have all these while despise Islam suddenly became brazen and came out of the woodwork to flash their contempt for the religion.

They feel that what happened in Paris gave them the right to say anything about Islam, its adherents and anything related to the religion.

In the case of lawyer Eric Paulsen, it turned out that his outburst against Jakim's Friday sermon was not the first time that he made a disparaging remark against something related to Islam.

I received this today, 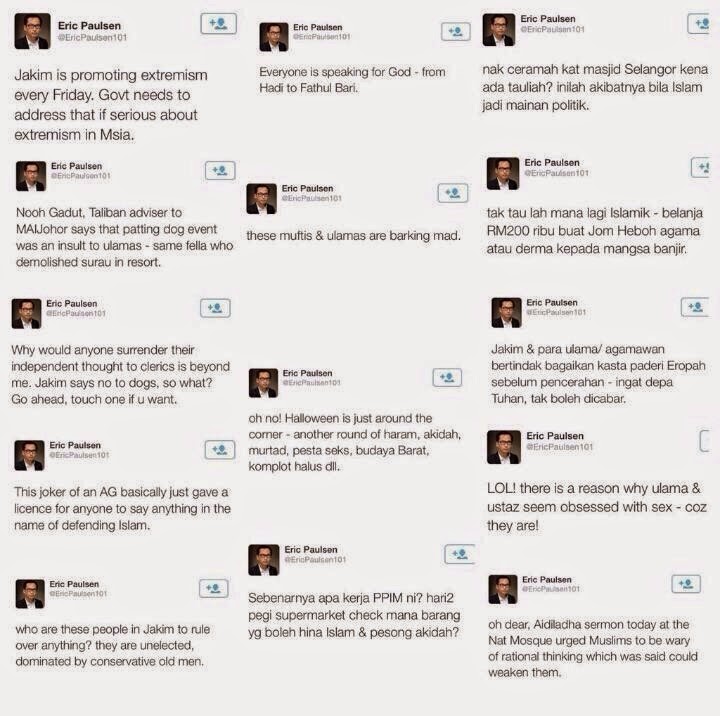 It's a list of tweets by Paulsen in the past, which touched on Islamic matters.

Please zoom in to read them.

They indicated a pattern of how the guy never really like anything related to Islam.

Since Paulsen is a Pakatan supporter, he predictably blamed Umno for the backlash from his tweet against Jakim.

He was quoted in several news reports of blaming the alleged "death threats" he received on "pro-Umno cybertroopers".

As of now, he never showed any remorse.

Other reports, however indicated that his actions were condemned by Muslims from both sides of the political divide and not just from Umno.

How did this Paulsen turned up that way?

In the run up to the last general election in 2013, the Pakatan coalition, in particular DAP, employed a strategy of sowing hate against Barisan Nasional, especially among the Chinese community.

Nothing less then hate would do at that time.

The main target is Umno, the dominant BN party made up of mostly Malay Muslims.

That's when Lim Guan Eng repeatedly told the Chinese that they were being treated as second class citizens, DAP cadres spread the belief that Chinese like Teoh Being Hock were being killed by Umno agents such as those in MACC, etc.

Knowing that it was crucial for Pakatan to win a significant number of Parliament seats in Sabah and Sarawak, Guan Eng in his Christmas message in 2012, not long before the general election, once again harped on the kalimah Allah issue.

His aim was to sow hatred among the large number of Christian bumiputera people in those states against the BN government by painting a picture of how Christians were being oppressed in this country.

The tactic worked to a large extent.

Even the Malay Muslims who supported Pakatan were taken in by the DAP's propaganda.

They really hate Umno and the BN government with all of their heart. It's nothing less than that.

Nothing coming out of Umno and BN are good and those who disagreed with them were enemies who need to be crucified.

It resulted in the Chinese tsunami during the general election.

Even the Chinese who were members of BN component parties voted for Pakatan in large number.

The level of hatred build up, particularly against Umno by the DAP's campaign ensured that.

Yes, I believe that if a Taliban or IS candidate contested against an Umno guy at that time, they would had voted the former. Anything but Umno, they said.

That's how educated people like Paulsen turned up the way they were.

They already dislike Islam for it's a faith which general adherents were, they believe, of lower standard then themselves.

They loathed that they have to live under the government led by these Malay Muslims who they believe were "low class".

And when people such as Guan Eng whipped up racial and religious sentiments in the election campaign, the level of hatred just went up quite a few notches up.

Of course they masked it all in the political campaign by claiming that they are against Umno and not Malay Muslims.

The only saving grace was that the bumiputera Christians in Sabah and Sarawak were largely not taken in by the hate campaign led by DAP.

Here is one of them who commented in this blog just a while ago. The comment about summed up everything on the root cause of current racial and religious problems in this country.


Anonymous13 January 2015 at 22:50
actually, no, non Muslim bumi's Allah IS NOT under threat from ISMA and PERKASA. I agree that non Muslim Bumis are the poorest lot - and they are mainly in Sarawak. However - the word Allah for the Christians have always been allowed in Sarawak, always. There was no issue nor furore over the usage of this word until the Roman Catholics in West Malaysia demanded that they too use it for their Herald publication despite knowing that usage of that word isn't conducive in the West Malaysian society. That's when the whole mess started. Before this - Sarawakian Christians have been using the word without problem. Now the west malaysian dragged us all into the mess and try to pin the problems on someone else.

So no, it isn't ISMA and PERKASA who is the actual problem here. It's that freaking Catholic church that's so belligerent and stubborn that they couldn't even compromise and use a perfectly legible word (TUHAN, anyone??) for their BM publication and dare to bring Sarawak's Christian Bumis into the equation to push their cause. Talk about political opportunists!
Posted by Annie at 07:53