Getting away with murder, among other things

Saw this story by national news agency Bernama and I said to myself, "These people are really trying to get away with everything."

Lawyer Datuk Seri Gopal Sri Ram submitted before the Federal Court five-man bench that the wrong provision was applied by the Federal Court earlier bench to convict and sentence Fong Kong Meng and his wife Teoh Ching Yen for culpable homicide not amounting to murder.

Fong, 63, a former wiring consultant and Teoh, 61, a housewife were initially convicted and sentenced to death by the High Court for the murder of Isti Komariah, 26, at a house in Jalan SS 2/6, Sea Park in Petaling Jaya, Selangor between May 14, 2010, and June 5, 2011.The Court of Appeal had upheld the High Court decision.Last year, the Federal Court five-man bench amended their charge to culpable homicide not amounting to murder under section 304 (a) and sentenced them to 20 years jail, to run from the date they were remanded on June 5, 2011.

The Bernama story described them as "elderly couple" and didn't mention how the maid had died.

This was the story back then;

Couple to hang for maid's murder


Justice Datuk Noor Azian Shaari, in her judgement, said the victim died of starvation as a result of the couple's failure to provide her food and medical treatment.
The judge also noted that the victim's weight had deteriorated to 26kg at the time of her death, from 46kg when she first started working for the couple.
Yes, they actually starved the maid to death, among other things.

That's pure evil to me.

There's nothing more deliberate than starving someone to death. To watch the person die slowly and agonisingly like that over such a long period. 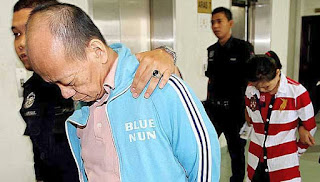 I think the Federal Court had been very nice to save them from being executed for their crime.

But now they basically want to be freed as soon as possible.

Well, it's rare for the bench of Federal Court to overturn the decision of a previous one. In fact, I always thought that once the Federal Court, which is the highest court of the land has decided on a case, it's final.

But maybe the couple's lawyer knows something as he seems quite confident with what he is doing.

Maybe they will get what they want.

Hey, the people who supposed to be taking care of our justice system have been making quite a number of surprising decision since the current government took over Putrajaya.

Quite a lot of people got their case dropped, okay.

Nothing is impossible these days.

Anyway, in case anyone think that I'm being cruel towards the couple who starved the maid to death, please imagine how would you feel if the person that they starved and abused to death was your own loved one.

Seriously, if they had done that to my loved one, I would like to kill them myself....of course if the laws allow me.
Posted by Annie at 18:12