Saifuddin said also stated in the agreement was on the legal process that would be initiated to obtain a Royal Pardon for Pakatan Harapan’s de facto leader Datuk Seri Anwar Ibrahim after the opposition pact took over the country’s administration.
“This is to ensure Datuk Seri Anwar Ibrahim can immediately play a role in the federal government and then to be appointed as the 8th prime minister,” he said. 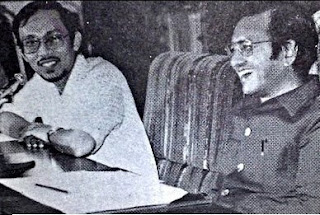 Honestly, I feel that this is a bit of a let down.

Can't they at least said once Dr Mahathir steps down as PM,  he'll be replaced by a credible young leader instead of Anwar?

PKR is still all about Anwar as PM, is it?

Isn't it by right about a better Malaysia?

Really, I was hoping yesterday for Pakatan to name Azmin as PM candidate and Mukhriz as his potential deputy.

That would have been much better.

Such a Pakatan move would likely force BN to push up younger and more credible people in their ranks to take over from the older and much tainted leaders. .

Well, if I have my way, I want this country to be run by good younger people.

The older people should just rest.

And they can put aside their baggages too.

This is what I previously wrote about my wish on this matter;

Let's say I have been given the chance to set a single rule for the next general election.What I would do is to ban everyone above 60 from actively taking part in it, except voting.Everyone above that age limit can't become a candidate or even campaign for the election in any way.They must sit quietly at home and only vote on polling day.

But of course it's not going to happen that way.

They really don't know when to let go of things, don't they?

We have no choice but to simply go with the flow.
Posted by Annie at 00:00