To vote or not to vote

This seems to be the most interesting political issue at the moment,


People getting fed-up with politicians.

The Pakatan people are apparently saying,

Boycotting GE14 will only help BN


Well, I think if they don't want people to boycott the election and vote for them, then they should improve themselves and be a proper alternative to BN.

BN people should do the same.

At the moment both sides are equally annoying and irritating.

I myself have half in mind of giving this coming general election a pass. 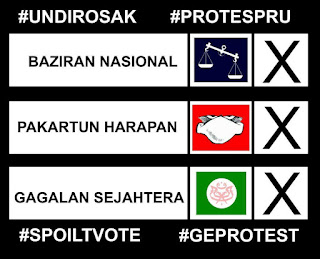 Seriously, as it is now, despite the loathsome characters of some Umno and BN leaders, many Pakatan leaders are no better than them.

Not worth my time and effort to vote for any of them.

Of course there are those who think that's being irresponsible.

But the right of not choosing is provided for in our democracy.

I used to argue this with my friends when we were in college.

Well, I think politicians don't like it that we don't care for them.

Especially those who are not good enough but insisted that they are better than others.

They need our votes to justify their relevancy.

The problem is that they don't seem to really bother to make themselves relevant to us.

Do you all really feel it's worthwhile to spend a morning of your life to wake up early, go to the voting centre, queue for quite a while and cast your vote for characters like Ku Nan? Or Rafizi? Or you don't know who else that have actually done nothing for you?

Seriously, isn't that such a waste of time and effort?

In my case, I have to drive down from KL to JB some more to vote.

It's just that at least I know who I'm voting for if I choose to do so.

Jazlan versus Salahuddin Ayub for MP.

Okay lah. Those two are not so bad.

Still waiting for their call.

State seat....the Chinese area of Pengkalan Rinting. That's definitely going to be DAP's. So, why should I bother?

Maybe I'll just drive to the beach and have a picnic on polling day.