The GE15 campaign is entering its final leg and I have to say that Pakatan appeared to have won the flags and billboards war as well as outperforming BN in term of its volume of social media contents.

BN's campaign appeared to be very low key compared to even Perikatan's.

I'm now somewhere in Kuantan and saw many more Pakatan and Perikatan flags and billboards compared to those of BN. 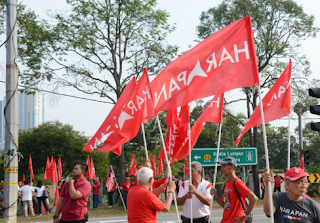 TikTok is also full of contents by Rafizi and gang.

I even got a WhatsApp massage from Perikatan's Saifuddin Abdullah asking me to vote for him.

Don't know how the guy got my phone number.

Yup, I'm voting for Indera Mahkota MP and Beserah assemblyman in this election.

Really, the BN's campaign here is quite subdued compared to those put up by Pakatan and Perikatan.

It made me believe that BN really doesn't have much money for GE15 after losing the last general election.

I guess most of the rich guys are now funding Pakatan.

Those huge billboards by the highways are not cheap to put up, okay. 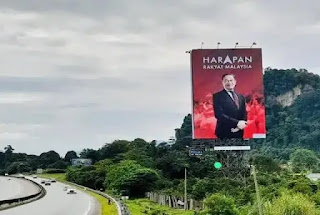 There was even a story that Anwar could afford to fly around in a helicopter to campaign.

Nonetheless, whether the flags, billboards and social media contents could translate into votes would be something we could only wait and see.

After all, BN had many flags, billboards and social media contents too in the last general election but it ended up losing quite badly.

I guess BN now has to resort to its old method of door to door campaigning to send its message.

Makcik-makcik going around asking their neighbours to vote for the coalition that had done so much for them and their communities.

Well, that's not so bad.

I don't think those makcik-makcik ever ask for money or contracts from Umno to campaign for BN.