Anwar likely to win in Tambun

A Pakatan-supporting friend asked me yesterday whether Anwar Ibrahim will become the prime minister after GE15.

The guy knew that I'm very BN-friendly for this election, so I assumed that he was just asking me that in jest.

I can be quite diplomatic, you see.

I told him that whatever it is Anwar needs to win in Tambun first.

Honestly, I'm quite puzzled on why he chose to contest there as it's definitely not a safe seat for him.

Voters in Tambun are roughly 70 per cent Malays, 18 per cent Chinese, 10 per cent Indians and slightly over two per cent of other ethnicities.

Incumbent Ahmad Faizal Azumu, who is now Pribumi Bersatu number two won the seat as a Pakatan candidate in 2018 with a 5,320 majority votes or just about five per cent of the over 100,000 voters.

Yup, it was not even a safe seat for a Pakatan candidate back during the height of public anger towards BN.

Despite my dislike of Anwar, I have to say that the guy was quite brave to contest in Tambun.

A bit like Khairy going to Sungai Buloh, except that Anwar decided for himself to go there while the handsome young man was sent to where he is contesting now by his Umno bosses.

I believe Anwar did it because he wanted to prove that Pakatan still have the support of many Malays despite the DAP factor.

Well, I actually think he may pull it off too.

Firstly, from what I heard the fight in Tambun has become a two-way fight between Anwar and Faizal Azumu.

The BN guy and other candidates seemed to have melted into the background.

I even heard that BN wanted to just put up a token resistance there because it doesn't want the Malay votes to be split, and thus giving an advantage to Anwar.

I suspect that if this is true, then many of those who wished to vote for BN would not turn up on polling day instead of voting for the Perikatan's candidate.

And there will be many of those.

Some, especially hardcore Umno supporters may even rebelled and vote for Pakatan in protest just to teach their party leadership a lesson for abandoning them in Tambun. That's what happened in 2018.

Anwar, on the other hand is almost certain to get the bulk of the about 28 per cent non-Malay votes and hardcore Pakatan supporters among the Malays.

So, Anwar already has more than 30 per cent of the votes in his bag.

He may get the rest of the needed votes from  the fence-sitters among the Malay voters, especially the young ones who are voters for the first time.

These neutral Malays may not like Faizal Azumu too because of Pribumi Bersatu's track record of switching sides, which made the party untrustworthy.

Anyway, what could they possibly gain by voting the guy who was deposed as Perak menteri besar, when they can get themselves a possible prime minister as their elected representative in parliament.

As much as I don't like Pakatan, I believe its chances of winning GE15 is way much better than Perikatan, okay.

BN is the likely winner of GE15, as I said in my previous posts, but the coalition seemed to have given up in Tambun.

Honestly, as I'm writing this, I can't even remember the name of the BN candidate.

That's how low-key is the BN campaign in Tambun.

Considering all that, I dare say we will see Anwar in parliament again after GE15. 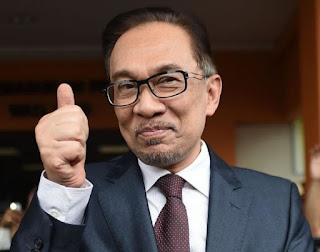