Apparently, more and more people are becoming sympathetic towards the sick and jailed Najib.

Here is one of them,

Najib, all prisoners should be given best medical treatment, says Kit Siang

“I fully agree with Najib’s daughter, Nooryana Najwa, and call on the government to give Najib the best medical treatment while in imprisonment, a right which should be extended to all prisoners in Malaysia,” he said.

Wah, Kit Siang is so nice and humane.
No wonder he got a royal pardon last time.
You can read about that one in my previous post

I don't actually blame him for starting to feel sorry for Najib now as he probably just realised that his son Guan Eng may likely get the same treatment in jail if convicted over the Penang Tunnel case. 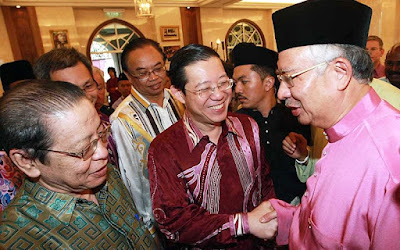 Ya, I would worry too if I'm Kit Siang, especially if Guan Eng's case is to be decided after GE15.

If BN wins the election, they may do what Pakatan did in 2018 by changing the judges and AG.

Things may not go down very well for Guan Eng if that happens.

By that time, Kit Siang can't complains much as BN would say it's doing the exact same things as what Pakatan did.

If Pakatan can put Latheefa Beebi Koya as MACC chief, BN probably can put a hardcore Umno politician in that position too, right?

PM instructs MOH to give best treatment to Najib

Then again maybe it's because

No PM can survive without Umno grassroots support, says Isham

Maybe all of us should just get use to the idea that those who lost in elections in this country will from now on go to jail one way or another.

Maybe all politicians should learn from this Anwar's video on how he survived in jail after being convicted for committing sodomy on his young male aide,