“What saddens me is that undue pressure is being brought to bear on the Yang di-Pertuan Agong not to exercise pardon (in Najib’s favour). This is a show of insolence.

“All Malaysians must respect the power of clemency given by law to the king and the Malay rulers,” said Zaid.

Well, they have been at it even before Najib filed the application for the royal pardon, which was his right to do so.

They need to keep Najib in jail as that's the only way they could justify their accusations against BN which won them GE14.

Even a pro-Pakatan friend of mine yesterday went all out to insist for Najib to accept his fate and rot in jail.

He basically laid down three reasons why Najib should just give up.

1. The Agong had on Sept 6 said Islamic justice does not at all give any privilege or exceptions to anyone who commits wrongdoing and this was supported by the Sultan of Selangor when he said on Sept 12 that the prerogative to pardon cannot be meted out arbitrarily for the sake of vested interest.

2. Sultan of Selangor has revoked the titles of Najib and his wife Rosmah.

3.  Najib's attempts to free himself from jail will widen the rift between "Umno Cabinet" and "Umno party" and further disrupting preparations by Umno and BN for GE15. 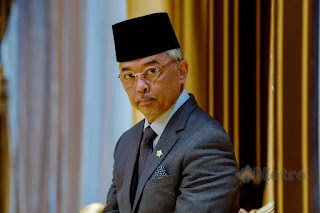 My friend did argue that Najib must serves at least one-third of his sentence before he can apply for pardon but there is actually no such requirement.
Maybe he was referring to Article 42(4) and 40(4) (a) which suggest that the Agong needs to get the advice of the Parole Board before granting a pardon but this had previously been ruled out by the courts which insisted that the king's discretion on the matter was his alone.
That was how the Agong freed Anwar from his sodomy conviction after Pakatan won GE14.
As for the revocation of title, that's the SOP of respective Rulers when someone was sent to jail. Sultan of Selangor once revoked Anwar's title too just because he badmouthed the royals but that doesn't stop the guy from continuing to cosy up to the Malay Rulers.
As for spoiling BN/Umno's chances in GE15, well, my friend being pro-Pakatan should actually encourage Najib to free himself. Good what if Pakatan can win GE15 because Najib is trying to get out of jail.
Anyway, when Pakatan was losing one by-election after another, and then losing one state election after another, Najib was happily going around campaigning for BN. Maybe that's the real reason why my friend doesn't want him to get out of jail.
Understandably, Pakatan people were quite pissed off to see people coming out in droves to meet "Bossku" after realising that they had been duped in GE14.
Errr....I'm talking about the Pakatan's empty promises. The manifesto, remember?
Can't really blame the people because despite all the allegations and now conviction of Najib, their lives were made much better under his administration compared to that of Pakatan's and the others after that.
Let's not even get into the part on how Pakatan pisses off the people during its 22 months rule as I can go on and on and on about that.
Even the PAS people realised that now.
Here's their party president;
Hadi gives reasons why PAS is against Pakatan
excepts;
...PH comprised many of those who switched parties on unprincipled grounds and practised “revenge politics”.

He also claimed that many PH leaders and supporters are clearly anti-Islam and hostile towards the Malay Rulers by threatening the country’s constitutional monarchy system.

“In fact, there are also those who fanatically hate the Malays and Bumiputeras, without realising that the existing rights of other religions and various races have been sufficiently provided for,” he said, adding that this was evident after PH was in power after winning the general election in 2018.

I guess they will go after Hadi again with their racist! racist! racist! chants.
Too bad that Hadi and PAS don't give a horse shit about being called racists like Najib and most Umno people do.
You all want to kill off Umno and its leaders like Najib, then you will get Hadi and the gang as replacement to lead the majority Malay Muslims.
Well, good luck to you all with that.
Posted by Annie at 15:13