I had a WhatsApp conversation early last month with a friend who is based in Tokyo.

He was asking me about the possibility of Umno really cutting ties with Pribumi Bersatu, which at that time was becoming a hot topic.

My friend is a senior analyst of a major Japanese corporation.

I believe that he needs to know about such stuff to advise his bosses about the investment risks in Malaysia.

After all, an Umno-Pribumi Bersatu split could cause the collapse of the Perikatan government, leading to more instability and higher investment risks.

I have always told him over the years that I'm not the best source for such intel but he somehow kinda like my take on the country's political happenings...or maybe it's just because I'm cute...hahaha.

Anyway, I just gave him my opinion which somehow is almost exactly what is happening now. Really.

- Umno grassroots really pissed off with Pribumi Bersatu for lording over them.

- Umno will indeed cut ties with Pribumi Bersatu but not in a hurry to push for GE15 due to Covid-19 and the need to clean its house first.

- The Perikatan government is not going to immediately collapse, so no need to worry about the country suffering from more immediate instability.

My friend then asked, if Umno/BN go on their own into GE15, then would Zahid be their PM candidate.

I told him that they couldn't be that stupid.

Zahid is after all not really popular among the general Malaysian public.

He may hold on to his Umno president and BN chairman posts but he certainly can't be their PM candidate.

That would be disastrous for them and even Zahid should know that.

So, in the end, this is the last bit of my WhatsApp conversation with my Japanese friend,

Yup, I suggested Mat Hasan as BN's PM candidate and my friend agreed.

My friend have been observing Malaysian politics for years, so I believe he knew why I recommended Mat Hasan.

The guy is actually the only Umno top leader that I currently like.

I'm not a big fan of Zahid and I don't like any of the vice-presidents, especially Khaled Nordin, as most long time readers of this blog already knew.

I don't know much about Mat Hasan though and only started to notice him after he led Umno/BN to a string of by-election victories that kick started the Umno's revival after their GE14 defeat.

His leadership was like a breath of fresh air for Umno when he took over the party leadership for a while from Zahid.

I met Mat Hasan in person only once just before the Rantau by-election campaign and found him to be a bit of a gruff. 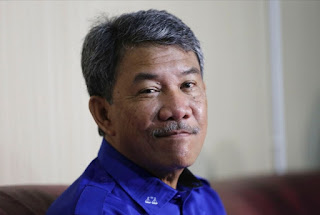 But still I like him for what he did to turn the tide for Umno.

Maybe it was just his no nonsense personality. Or maybe he was having a bad mood that day.

Doesn't matter to me.

For me, he lends the credibility to Umno's claim of wanting to be better than it was before GE14.

I really hope Umno will pick him as their PM candidate.

Hopefully Zahid has the wisdom to think the same to make way for Mat Hasan to play that role.

I believe that Umno/BN's chances in GE15 will be greatly diminished if they put someone else as PM candidate.

Really, Umno needs to have a new face to convince not just Malays but also the rest of Malaysians that it could offer a better leadership for the country.