Perikatan will not collapse if Umno pulls out now

I saw a story yesterday which said that the Umno supreme council will decide on Sunday whether to stay or leave the Perikatan government.

The story quoted sources, so it's not really that credible.

Sources stories tend to be sos chili or sos tomatoes stories only.

Still, this could be fun to discuss.

Well, as I previously wrote, I think Umno and its BN allies should stay in the government until the parliament has been properly dissolved.

We need a functioning government amidst this Covid-19 pandemic and I'm of the opinion that the better ministers now are those from Umno and BN.

Okay, they are not great but still better than those from Pribumi Bersatu and the others.

Also bear in mind that the state of Emergency is still on.

That means the Perikatan government will not collapse even if Umno and its BN allies order their ministers to resign and announce themselves as opposition parties.

Muhyiddin will simply appoint new ministers to replace them.

Doesn't matter if the new ministers are as useless as those already in the Cabinet.

This will be the case until August when the Emergency was supposed to end.

But will it ends?

They may just prolong it further, and I have a feeling that they will only lift the Emergency when they are sure they can stay in power.

Let's say it stretches to early or middle of next year. That's a long time and anything could happen.

Well, we already have Pakatan people, who were supposed to be men of integrity jumping over to Perikatan.

Give some more time and more may jump, I think.

So, Umno pulling out of the government now would be a bit of a silly move.

At least if their ministers are still there, they could do something for the rakyat and provide some checks on what the government is doing.

Surely, not all of the Umno ministers are Pribumi Bersatu stooges.

Okay, if Umno really wants to show that it's serious about telling off Pribumi Bersatu, it could just order those in the GLCs to resign.

As I previously wrote, that will not hurt the rakyat.

After all, those are mostly the useless fat cats who make Umno looked bad anyway.

Then there's the matter of Umno elections.

Despite my dislike of many Umno top people now, I'm of the opinion that they should postpone it until after GE15.

If they have it now, Umno will be weakened by the ensuing infighting of which it would not have enough time to recover to face an election.

My hope is that for Umno leaders, particularly its president Zahid to play this one wisely.

As I had said, he can stay on as president but let Mat Hasan takes charge.

Let Umno have a fresh face to present to all Malaysians.

I dare to hope like this because Zahid and Mat Hasan seemed to be going well together of late. 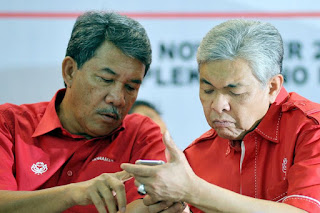 They seemed to have a united front by making the same stand, such as during the recent party general assembly.

Maybe Zahid has realised that the relatively credible Mat Hasan is actually his best hope to survive the fight.

It most probably that he had seen it that for him to survive, Umno needs to win GE15.

And in order for that to happen, he needs Mat Hasan to be there for Umno and him.

I'm confident that Mat Hasan would be there and deliver if given the chance to do it.

Zahid should start by making Mat Hasan, as a party deputy president should, the director of Umno/BN election machinery again.

He should correct the awful mistake of giving that job to the boorish Tajuddin Rahman, whose image alone makes Umno look like a Malay gangster party.

If Zahid does that, it would give Umno people the semangat that they needed.

After all, they need to regain the momentum that brought Umno the string of by-election victories before the Pakatan's collapse.

Yup, I don't mind repeating it, Mat Hasan is the key for Zahid and the rest of Umno.

And probably for the rest of Malaysians too.