Last Jedi and a day at the mall

It's the first Star Wars movie that I watched in cinema.

Quite good, should I say.

Better than all those comics reboots.

In fact, I think it's the third best among the Star Wars films.

My favourite is still The Empire Strikes Back, followed by A New Hope.

Well, this latest Star Wars movie is good because it's the best of the non-original trilogy and it beats Return of The Jedi in my list of favourites.

It's serious and quite dark but I guess that's what the audience want these days.  Heard that even Dr Mahathir and Dr Siti Hasmah went to see it yesterday.

I'm not going to do a full review of the movie because there were already plenty of those around.

Just want to say that I agree with those who said that it should be the last of the old Star Wars movies and the start of a new series.

The guy remained single all his life. I think he fell in love once but it turned out that Leia is his sister...urghhh....what a tragedy.

Somehow I believe Rey, the new main character, will end up like him.

I suspect that she loves Finn, but that guy will later on turned out to be in love with Rose, the cute chubby Vietnamese girl. 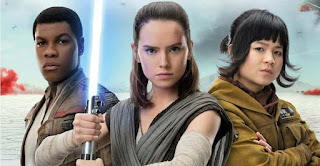 Somehow I think all guys tend to prefer Asian girls, if they were given a choice.

White girls can't beat Asian girls even if the Force is strong with them....hahahaha

I just hope that they don't make it that Rey will later on find out that Finn is actually her brother by some genetic engineering or something, so as not to hurt her too much for losing out to Rose.

They did that to Luke in Return of The Jedi just to make him looked less pathetic for losing out Leia to Han Solo. I really hate the movie because of that....aside from the Ewoks....

Seriously, why they need to make it so complicated.

Well, whatever it is, I do recommend this new Star Wars movie. Seriously, it's good.

Anyway, I spent my Sunday yesterday at the IOI Mall in Putrajaya.

The place was packed with shoppers.

Christmas shopping I guess....even though I think more than half of them are Malays.

Still, it's good to see people enjoying themselves.

Lots of bargains too.

I bought a pair of new shoes on sale for RM209. The original price was about RM300. Nice, tough and comfortable.

Here are some pictures I took at the mall,