Someone has been needling me to write something about the comments made by Tunku Mahkota Johor which were supposedly directed at Youth and Sports Minister Khairy Jamaluddin.

TMJ, according to that someone, was criticising KJ for being in the national polo team and having a high rank in the auxiliary Wataniah army.

That someone, who is a huge fan of TMJ said the prince was right about KJ being more interested in taking part in sports rather than being a minister of sports.

He said TMJ was also right to point out that he is a better polo player and military leader than KJ.

Personally, I think he got at least the second part right. TMJ has been playing polo since he was a kid and his royal family have their Timbalan Setia army.

I'm quite sure TMJ would easily beat KJ in a polo match or shooting competition. 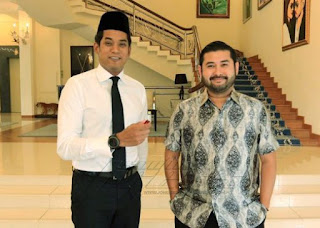 Anyway, there's not much to comment on it other than that because KJ has been mostly quiet about the whole thing.

Smart guy. He knows that it's not wise to reply to the supposed TMJ's comments directed at him.

KJ is not Nazri Aziz, okay.

That's why he still survive (and prosper) after his father-in-law stepped down as PM in 2009.

I was actually impressed that  KJ took part in those sporting activities such as the Ironman challenge. 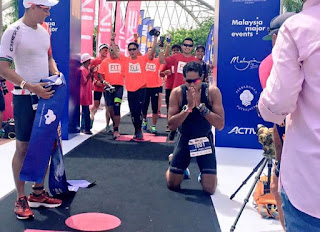 Sorts of leads by example.

Young sportsman managing the country's sports. It was good for his ministry's image.

But then again, TMJ may have a point, as according to his fan, who said if a minister is too much personally involved in the actual sports activities, then he may lose focus on ministering the sports itself.

Player-manager is actually not such a good concept after all.

Maybe KJ should ponder on it.

Meanwhile, this is something great for Malaysian sports,


Diving is definitely now a world medal prospect for Malaysia.

Maybe KJ should push the sports more into prominence so that more youngsters will be interested to take part in it.

He can learn to dive himself, just the same way he tried with the other sports.

No need for him to take part in SEA Games or anything like that la but maybe he can later on do a promotional video of the sports with him doing some fancy moves diving into the pool.

KJ may even invite TMJ to compete with him in a special diving competition after that.

I'm quite sure that will create quite a splash in and outside the pool.

KJ may even win that one.

Okay, on a more serious sporting mode, here's a compilation video of Jun Hoong in action ;