So many people have been writing about the MRT of late. 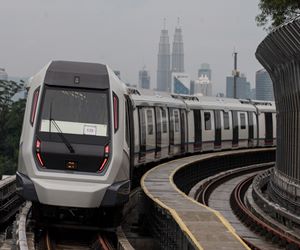 It is indeed good to have it, especially for those living in the Klang Valley.

KL finally joined other big cities of the world in having a proper modern public transport system.

I believe it will transform the city for the better as more people leave their cars at home and commute on the MRT.

I was not planning to write in more details about it as there were so many such articles already.

Anyway, I had first wrote about it with a bit of politics in this post in December last year,


Nonetheless, following complaints of vandalism and lack of etiquette among some commuters using our brand new MRT, as highlighted by the media and fellow bloggers, I would like to put a video here which I think can help us learn how people in another country go about on their train,


Notice how clean and quiet the trains and stations were.

No garbage and no people talking loudly irritating other commuters.

Everyone behaves even in the packed train.

I've been on those Japanese trains, having once stayed near the Tokyo Station for a week.

They were as they are in the video.

Okay, and this is a comparison between commuters in Japan and those in India,


I think we should be more like the Japanese.