Malaysia must not join Arab states against Qatar

Being neutral is  better than going headlong blindly into a fight.

This is so, especially, when we are not sure what the fight is really all about or when it doesn't even concerned us.

I know, some of you all find this unacceptable and want us to take sides and fight no matter what.

You are with us or against us, they said.

Really guys, it's okay to be neutral and chill out when we need to do that.

That's my stand in the Najib-Dr Mahathir fight.

I prefer that than getting a bloodied nose for stupidly fighting just because that's what the crowd are doing.

Malaysia itself tends to be neutral most of the time.

During the Cold War, even though we were closer to the West, we still maintain friendly relations with the Eastern bloc of that time.

In fact, Malaysia is one of the more active members of the Non-Aligned Movement, which promotes world peace. Being non- aligned, means we do not take sides, especially of the big powers, in their fights. We instead took in the facts of such conflicts and be objective about it.

This philosophy is the hallmark of Malaysia's foreign policy since back then.

That's how we as a small country survive at world stage all these while.

That's why I was quite concerned when told by my sources today that there were people at the highest level of the government who wanted our country to take sides in the dispute between Qatar and a few other Arab countries.

Seriously, why the hell do we need to get mixed up in that Arab quarrel.

I really thought we were all doing well on the matter when the Foreign Ministry issued this statement on June 29,


Malaysia shares deep and abiding relations with all countries involved in the difficulties surrounding Qatar and some Arab countries which began on 5 June 2017. Our relations are across the whole sphere of human activity – particularly cultural, religion, economic and people-to-people. For this reason, these difficulties are a matter of deep concern for the Government and people of Malaysia.

Referring to the Media Statement made by Datuk Sri Dr Wan Azizah Wan Ismail on 27 June 2017 on the matter, the Ministry of Foreign Affairs of Malaysia would like to emphasise that Malaysia has been in constant contact with all the countries involved since the beginning of these difficulties. YAB Prime Minister and YB Foreign Minister have been communicating with their counterparts across the Muslim world since that time, in order to apprise each other of the latest developments as well as to find a resolution to these difficulties. During these contacts, Malaysia has emphasised its neutrality. At the same time, we have offered to play any constructive role that the parties involved feel is required. This offer and concern have been well received and appreciated.

At the same time however, the involved countries have expressed their hope for other countries and international organisations to provide the countries involved the opportunity to resolve these difficulties through their own regional framework, such as the Gulf Cooperation Council (GCC) as well as the mediation efforts of the Emir of Kuwait. Malaysia and other countries outside the GCC respects their wishes. Consequently, we will support all efforts by the GCC and the Emir of Kuwait.

Malaysia hopes for a speedy and amicable solution to these difficulties – it can only be a boon to the Muslim world as a whole. At the same time, we remain committed to combatting and confronting terrorism and extremism, and support all efforts to achieve peace and stability in the region.

I was told that the people who wanted us to take sides in the dispute wanted Malaysia to be with the other Arab states going against Qatar.

The other Arab states accused Qatar of supporting terrorism, among others, and have since last month placed the tiny but rich Gulf state in isolation.

That was a bit weird to me because Qatar appeared to be more progressive and modern compared to those other Arab states. 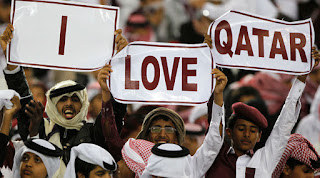 Notwithstanding all that, it made me wondered what were the motives of those people in the government who wanted us to also join those other Arabs in isolating Qatar.

Anyway, I was told that Qatar has about RM50 billion in investments in Malaysia.

Those who wanted us to go against that country should think what would happen if Qatar pull out those investments.

Then there are those Malaysians who now work in Qatar. How about them if we want to boycott that country?

And, really, what is it again the purpose of us to even consider taking sides in that Arab quarrel?

I hope PM DS Najib Razak will not listen to those people.

Let's be friends with all those Arab countries and try help them settle the dispute instead of ourselves joining in the fight.