I'm not sure what got into me but I responded to several comments at my last post.

Normally, I don't do that because I prefer for the comments section to be a place for you all readers to express yourself instead of it being a place where I engage you all in debates.

Maybe it's that time of the month....makes me easily irritated.

But really, the comments were sometimes so inaccurate that I also cannot tahan.

Sorry if I sounded a bit emo on that one.

Okay, for today, I don't want to write about anything stressful.

Just want to share with you all something my mom sent me last night.

This is one of several pictures she sent me, 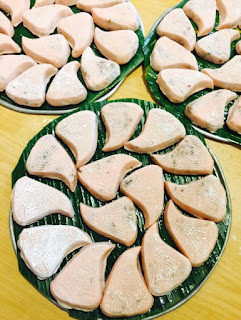 Those are Teowchew Png Kueh, just before being steamed.

My mom made those with the rest of the family.

They gathered at my great aunt's place for that last night.

So happy to see my grandma looking so cheerful like everyone else in the pictures. Guess she has fully recovered from her ailment.

I was so jealous that I can't be there myself.

Anyway, Png Kueh is a traditional snack popular among the Teochew people.

Actually my grandma is a Teowchew while my grandpa is a Cantonese.

However, my mom prefers to be identified as a Teowchew.

My dad told me once that my mom is actually very vain. She prefers to be a Teowchew because the Teochew people are supposedly more "refined" than the Cantonese.

Of course my dad kena from my mom after that for calling her vain :)

But since Chinese are practical people, they eat the Png Kueh too.

Png Kueh is also known among the Teowchew people as Poon Tor which means peach dumpling.

It symbolises longevity as per story of the Monkey King which became immortal after eating sacred peaches at the Jade Emperor's garden.

And in case you are wondering, yes, the Malay word "kueh" is actually Chinese.

My mom actually also sent me a video of her making the Png Kueh as a guide for me if I want to do so later.

Wish I can share it with you all here...but of course I can't.

So, instead, I put here a video made by I believe an Indonesian Chinese on how to make the Png Kueh. It got instructions in Bahasa Indonesia so that it's easier if any Malay Muslim reader of this blog wish to give it a try,

A word of caution though for Muslims, the minced chicken used as part of the filling could also sometimes be pork.