Yup, I'm blaming my blogging captain Rocky for this latest outburst against him

Judging by the choice of words, there's no doubt that former information minister TS Zainuddin Maidin (Zam), who is also a Tokoh Wartawan Negara is very angry with Rocky.


In my opinion, Rocky should know Zam better not to make him angry like that when he posted this,


Then a reporter from the news portal Malaysian Digest called me up for my comments. Damn. I was hoping I didn't have to comment on what Zam had written on his Twitter but  a fellow journalist is asking me what I thought of Zam's tweets?
Well, to put it simply, and speaking as journalist, I was ashamed.
This is the recipient of the 2006 Tokoh Wartawan Negara (Eminent Journalist) award that we are talking about, I told the Digest.

Rocky should know that Zam doesn't take that kind of criticism very well.

And Rocky should also know that it's not out of the ordinary for the guy to tweet such as this, 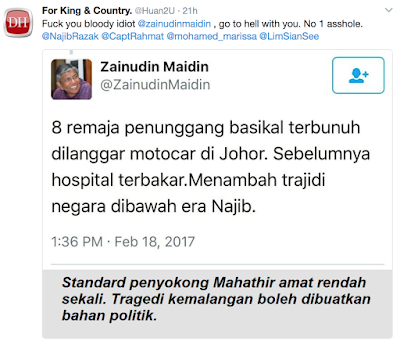 Rocky should just let Zam be the way he is.

I know that it's not nice to link the JB bicycle tragedy which killed eight kids with the agenda to topple PM DS Najib Razak, but that's just typical of things these days.

Well, maybe Rocky sorts of lost his cool when he saw that tweet by Zam.

After all, he tends to overly care about that sorts of things.

Everyone who really knows Rocky would agree that the guy almost never lose his temper or say/write something in anger.

The guy also never impose his opinion on others, as far as I'm concerned.

I really owe him a lot, yet he never asked me to write anything that I disagree with, let alone angry if I say or write something contrary to his opinions.

See, I'm not even afraid to put such a headline for this post which blame him for the whole thing.

I know he would be cool about it.

Well, whatever it is, I don't think Rocky was being too harsh that Zam had to respond the way he did.

I mean, the words that Zam used was rather extreme.

Rocky should just let him be and let the public decide what to make of his tweets and blog postings.

The whole thing actually reminds me of a quarrel I had with a very famous blogger sometimes back.

Annie : Sis, you shouldn't say Umno members who disagree with the party leadership must be expelled. That's because they are still loyal to Umno itself and will vote for BN in the election.

Very famous blogger : You are stupid. You are a Trojan Horse. You are a paid DAP cybertrooper. I'm going to expose you. You bitch.

Isn't it a bit similar to this Rocky versus Zam thing?

Anyway, personally, I think what really made Zam very angry was the part where Rocky mentioned his 2006 Tokoh Wartawan Negara award.

At first I didn't get it because Rocky seemed to be holding back something, which is typical of him about being proper and not rude.

But  Big Dog in his latest posting went all out as usual and made it plain what it was all about,

If memory serves us right, he received the MPI award in 2006 when he was still serving as the Cabinet Minister in charge of information, where media and press are answerable to him. It is irony for the statement he was quoted by Bernama against his gutter tweets, upon the tragedy for the teenagers cycling at Mahmoodiah, Johor Bahru a week ago. It is also believed that the Information Ministry then provided the organisation which gave him the award a substantial grant. The fact that as a serving Minister, he was willing to receive an award for an industry he had power of supervision and control itself demonstrated his moral values.

Of course Zam hit back at Big Dog in his latest posting,

I was like...Aiyo, Big Dog, don't be so blunt la. Now you also make the guy angry. Don't make old people angry, can or not?

Okay la, to be fair, Big Dog is Big Dog. Nothing can be done to make him less blunt.

In fact I believe I was very polite with Zam in this instance when he once accused me of something which I'm not,


If I remember correctly, Zam later apologised to me.

See, be nice and we may achieve something and peace would prevail.

Okay, hopefully the fighting will not drag on.

It's depressing lah seeing all these seniors of mine like that.
Posted by Annie at 17:36