This is the top story of SundayMail yesterday : 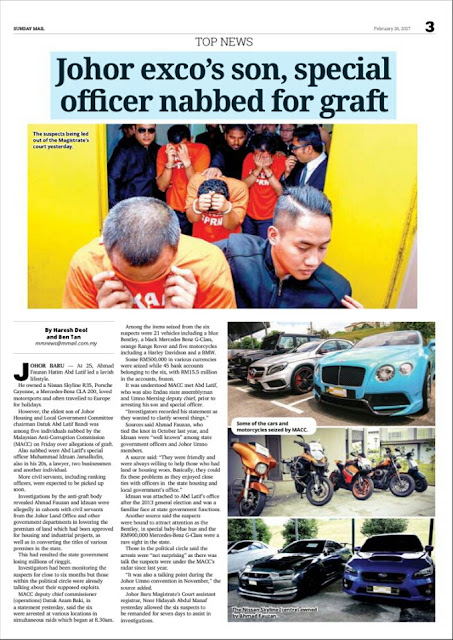 You can read the online version here,


At 25, Ahmad Fauzan Hatim Abd Latif led a lavish lifestyle.
He owned a Nissan Skyline R35, Porsche Cayenne, a Mercedes-Benz CLA 200, loved motorsports and often travelled to Europe for holidays.
However, the eldest son of Johor Housing and Local Government Committee chairman Datuk Abd Latif Bandi was among five individuals nabbed by the Malaysian Anti-Corruption Commission (MACC) on Friday over allegations of graft.
Also nabbed were Abd Latif’s special officer Muhammad Idzuan Jamalludin, also in his 20s, a lawyer, two businessmen and another individual.
More civil servants, including ranking officers, were expected to be picked up soon.

I'm glad that they are finally doing something about this whole nonsense in Kota Iskandar.

I have been bitching about it since those early days.


I know that back then they laughed at me and said I knew nothing and simply wrote blindly.

Well, I now hope that the MACC will catch them all.

They did the right thing by sending a team from outside Johor to carry out the operation.

I was informed that the operation was supposed to be carried out today but had to be hastened because of possible "leakage".

A tip for the MACC guys :

Just check what car those suspects at Kota Iskandar drive and see whether they could really afford it.

You all would be amazed that they could afford such wheels at their gomen salaries.

Also, much credit to Johor MB DS Mohamed Khaled Nordin for not interfering with the MACC's crackdown.'

If they can really clean up Kota Iskandar, I think Johor BN stands a better chance in the next general election.

That, and of course if they work hard on the ground from now till polling day.
Posted by Annie at 16:22