There has been a huge spike in the number of page views of this blog since Saturday. 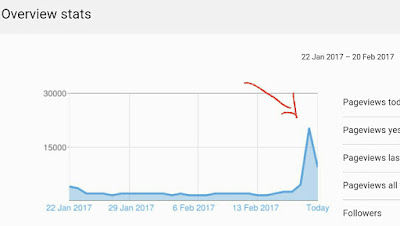 It came from my last posting,

So, I would like to give a big thank you to the Facebookers who picked up that posting.

That posting is now the most read of this blog, taking over the spot from

which I wrote on May 12 2014 at the height of campaigning for the Telok Intan by-election.

It's good that a lot of people are concerned about the tragedy where eight kids were killed early that morning.

It also made me conclude that Malaysians are still very much concerned about social issues instead of just being preoccupied with political nonsense.

Hopefully, such awareness will help makes our society better and prevent the tragedy from ever happening again.

However,  I have to admit that I was a bit disturbed by some of the comments that I received for that posting.

I really feel that it's not right to turn the whole thing into a blame game and the vilification of anyone, especially the kids who died in the tragedy.

For that, I have to agree with this commenter,


Anonymous20 February 2017 at 08:59
Compassion: sympathetic pity and concern for the sufferings or misfortunes of others.

I fear that many of us have lost this. Compassion is not only for those who are baik. But more so for those yang tergelincir. Remember Allah SWT is Ar-Rahman Ar-Raheem,the Most Compassionate and Most Merciful. He doesn't leave His hamba despite them being thankless. He opens the door of His mercy to whomever He pleases. For Allah Ta'ala is Al-Fattah. May Allah Ta'ala forgive us (for) our arrogance. May His infinite Mercy be upon those who have passed on and their families. And us all. Ameen Ya Rabb.

Is it so necessary to always pin a blame on someone for everything bad that happened?

Shouldn't we instead think of solutions which may prevent such tragedies from happening and seriously implement them?

Whatever it is, thanks to all of you for caring.

Thanks for the prayers too.
Posted by Annie at 16:42