For another honest write-up, please click on this link,

Teenager detained for urging public to gather over bicycle tragedy


and told myself to be extra careful with what I want to write in future.

I don't know what exactly that the teenager wrote but this is how it was described in that Bernama report,

I really don't fancy ending up in a police lock up for such things.

Even if later on I'm not found guilty of anything, I don't think I want to risk spending a few nights in the lock-up.

Never been in one, but I believe it's not going to be a nice experience.

Well, the law is the law and we better abide by it.

Don't simply write anything that crosses our mind.

I really need to caution myself over that as I do that quite a lot.

Anyway, I hope the police will not be too hard on the teenager.

Maybe the boy was just venting out his frustration over the death of the other teenagers in the tragedy.

Sounded like he needs a counsellor rather than jail time for what he wrote. 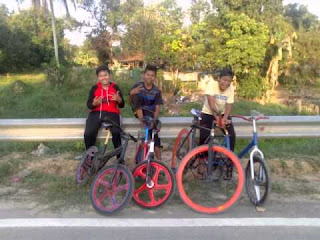 I think it may help us understand a bit more as to why teenagers such as the ones who died in the tragedy did what they did, and what we should do to help them.

I polished it a bit to make it easier to read and I hope the writer doesn't mind it too much.


Pedal Pumping23 February 2017 at 22:26
Usually, its the vehicle that is racing or running at a high rate of speed. Here we have a group of boys racing on bicycles at night. So even if the driver was following all rules of the road, there is nothing that could prevent this tragedy from eventually happening. Also, taking into account that it was around 3 a.m, therefore its dark and I highly doubted that the boys had head lights.
The other factor is that, since the bikes were moving at a high rate of speed down a hill, they would not be able to brake to avoid the car.
One thing that all the above factors I have noted have in common is that it added to the thrill of the race for the boys.
They have nothing compared to the next class up (teens from families of higher income group).
In the past, as a child was growing up, he may encountered another that is very rich and has all the toys provided by his/her parents' wealth. Or, maybe he saw it (such wealth) on t.v. But, for the most part, the people in his community are within the same income and wealth range (as his family).
The way I saw it happened is that these groups of kids that have nothing compared themselves to all the people who are moving in to live around their community, whose kids have what appear to be all the toys, joys and devices of a good life.
If that was not enough, these new groups of kids that have more than them appeared to be arrogant, self centered and actually follow in their own parents' foot steps in their actions such as belittling the poor kids and making sure the poor group know they are poor and in not so many words - they stick it to them.
So, in order to avoid the pain, the kids that are poor would avoid any contact with these people and if they are in school they will not stay back when they were supposed to be involved in sports activities or something to do in the community
They would come up with all sorts of excuses as to why they don't want to stay back (and get involved in such activities).
They would find other like-minded friends and together as a group they start to hate the grown-ups, not only among the other more wealthy group but also those from among themselves.
They actually hate themselves and their life or maybe they even hate being alive.
These type of thrill bike races have elements of extreme social desires for the kids. The races are dangerous and other kids had died before for taking part in them. So, the kids look at it as a way out. By doing such things, a kid feels that he is part of something, and that he is somebody at that moment, where he truly and honestly in his mind does not care if he dies.
He felt that his life is worth nothing and he has nothing.
Even though it all appears bleak and dark, the one thing the event does for the kid is that it gives him a desire to be what he wants, a pleasure to fantasy about, a social platform to talk with the other kids who are part of the bike racing gang.
The people in charge of the government will do nothing. Maybe they will send the police out to round up all the boys and take their bicycles away. But that is actually a wrong move.
Instead, a park or an area needs to be developed that is equal to or if not, some what better than what is on the other side of the city where the wealthy kids go to hang out.
These kids need a system to be put in place to make them feel good about themselves.
They need to be given a platform to compete and social recognition.
Money will have to be spent.
However, I don't think this would happen as I've seen this time and time again where the officials would rather give money to a project that will increase tourists at the local eating establishments or hotels or anything that will bring in more money or help the business owners who don't even live in the community (where the kids live).
The bike races, if it is ever to be stopped, will be done in a way that would leave the boys with absolutely nothing.
It will be done in a way that will make the boys think lower of themselves and the community they live in.
The next step will be the boys' consideration of joining a criminal gang.

That I think is brutal honesty.

I even believe that the commenter is one of the youths.

You all may disagree with what he wrote but that I believe is a voice of kids such as those who died in the tragedy.

Maybe he wrote the comment to express his grief over the passing of his fellow youths in the tragedy.

Maybe it's the same with the other teenager who was detained by police for what he wrote.

Whatever it is, I think we need to be more compassionate.