A KFC dinner with a good Umno big shot

I was having a KFC dinner alone the other night when a friend and his family turned up at the place.

It was quite a pleasant surprise for me as I had not met him for quite a while.

My friend is quite a big shot at the Umno headquarters.

Yup, he still eats KFC despite being an important Umno guy and a Datuk. 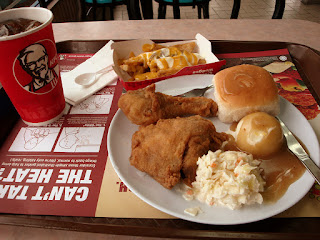 His wife is also very nice and doesn't behave or even look like a Mak Datin.

I never called them Datuk and Datin.

Sounds weird to call my friends by those titles anyway.

My friend sat with me while his wife and children had their dinner at an adjoining table.

As usual, we mostly talked about politics.

His wife doesn't care much about such things.

She is a successful businesswoman and doesn't depend on her husband much for money.

I think she is even richer than her husband.

And nope, she also doesn't depend on her husband's political connections to be successful in business.

Really, I'm telling the truth about my friend and his wife.

There are indeed Umno people who are like that.

Anyway, my friend told me some latest developments in Umno's preparations for the next general election.

I can only tell you all that it's going to be much earlier than expected.

I asked him whether Umno is confident of winning and he said yes.

Reason - the opposition is in worse shape than BN.

I think he was being truthful about that.

The opposition is indeed in a mess at the moment.

And that, even when they are yet to win the election.

The earlier the general election is held, the less time for them to patch things up.

Nonetheless, my friend said there are still worries because the BN machineries are still plagued by glitches.

"Too many people are busy promoting things for their own vested interest. They spoiled everything," he said.

My friend also agrees with me that the best way to deal with Umno members who are unhappy with the leadership is not to throw them away.

"We must win back as many of them as we can," he said.

"Of course the hardcore ones have to go. Nothing much we can do about them anyway."

It was good to hear that.

So, it's not true that everyone at the top of Umno preaches that "either you are with us or against us" mantra.

I'm of the opinion that those who advocate that stupid phrase are either stupid or intentionally trying to tear Umno apart from within.

My friend also told me about how like minded Umno people such as himself are trying their best to stop others from using the party for their own personal interests.

He said it's not easy.

Well, at least now I know there are those who are still trying to do the right thing.

I wished him and his band of good Umno people all the best.

Another thing that I asked him was whether he feels that the mainstream media bosses are doing the right thing in their support for the establishment, especially in the way they harshly handled Tun Dr Mahathir Mohamad.

My friend's face changed when I asked him that.

He then made a vulgar sign with his fingers but did so discreetly so that his wife and children didn't see it.

Well, what to do, everyone has to earn a living and that's all some people are good at.

My friend should know about these sorts of things.

He was in the thick of things when Pak Lah's people used the same tactic against Dr Mahathir and the outcome was the disastrous 2008 general election.
Posted by Annie at 12:37