Umno needs to focus on GE15, not Najib

It looks more and more likely that Najib is going to jail.

Even his legal team seemed to admit it that the guy's fate has been sealed after the judges blocked each and every attempt that they made to prove his innocence.

They have already said they would not make a submission for Najib's final appeal.

Obviously, they did that to express their protest.

The judges have more or less said that they don't care.

They have a mission to accomplish, and that's that.

Well, that's the way it is then.

Naturally, Umno people are quite upset about the whole thing.

It's almost the same way when Pakatan people got upset when the judges back then ruled against Anwar and sent him to jail for sodomy and abuse of power. 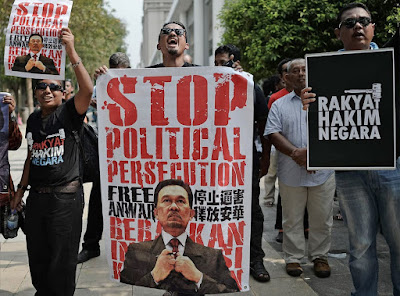 Back then they said Umno/BN was behind the judges decision.

I'm sure they, especially the DAP people will get upset again if the judges rule against Guan Eng  in the Penang tunnel case.

Yup, they will once again say it's Umno/BN people who are behind it.

But for now they are cheering what seemed to be the imminent jailing of Najib and Umno people are not supposed to complain about it.

Ok lah...grumble a bit, but that should be just about it.

They need to get Ismail Sabri to abide by the party's resolution during its last general assembly to dissolve parliament by end of next month and call for the election.

Get him to stick with the original plan of Umno and its BN allies to contest on their own like they did during the Malacca and Johor elections.

If Ismail Sabri refuses that, get rid of him.

If Hishammuddin, Annuar Musa and others like them refuse, get rid of them too.

As the Pakatan people used to say, the rakyat are the supreme judges (actually it should be God).

So, give the mandate back to the people.

And that means NOW.

That should be the focus of Umno/BN people.

Also, keep in mind that anyone in Umno who oppose that are traitors.

Oh, by the way, since Anwar that day can get royal pardon, I'm sure Najib would be entitled to get one too....and so will Guan Eng, if he gets convicted la.