There were so many political parties' meetings today.

Everyone said they are ready for GE15.

Muhyiddin, Anwar, Rafizi, Shafie Apdal....all said they are ready and will win.

The others seemed to prefer Ismail Sabri to hang on until the end of the parliament's current term, which should be till the middle of next year.

All that despite Umno being the one which was supposed to be in trouble now because Najib is in jail.

Isn't it good for Pakatan, PN, Warisan and others to have GE15 now?

After all, their supporters appeared to be so gung ho that day when Najib was sent to the jail.

Oh, and Rosmah is also going to jail.

Apparently the court judgement on her has already been leaked and she will be found guilty.

Shouldn't that be a further boost for the anti-Umno/BN factions?

I think Ismail Sabri should consider all these.

He was unfortunately not at the Umno gathering along with several of his ministers from the party.

Mail, they wanted you to call for GE15 now, okay.

Hey, who knows, maybe it would be a good thing for him. 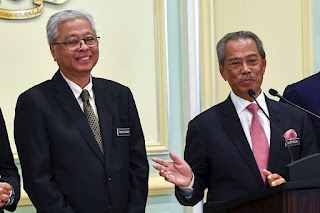 Muhyiddin said today that BN is going to lose anyway, even if GE15 is to be held tomorrow.

Never mind that his Pribumi Bersatu got thrashed by BN in every by-election and state election since 2018.

Okay, maybe BN is not going to lose outright but it may need others to form a government.

That way Ismail Sabri can continue to be PM in a hybrid government like now.

Yup, maybe Umno overestimated its support among the rakyat and will not do well.

Maybe the rakyat really believe in the court judgement that Najib was guilty of stealing their money to buy Rosmah's Birkin handbags and pink diamond....like they did in 2018.

To punish Najib is to punish Umno/BN, what.

So, maybe it's not a bad idea to have GE15 as soon as possible while the rakyat is still very angry with Najib and his thieving ways.

Pakatan, Perikatan and the others shouldn't have any worry if GE15 is to be held in the coming weeks

Really,  they should have more faith in the courts' decisions which are reflective of the rakyat's belief about Najib's guilt.

Najib's one is for real.

Guan Eng's tunnel corruption case....errr....that one will depend on the outcome lor.